Rome, one of the must-see cities in the world. Having travelled a lot around Europe and the World both on business and pleasure, I never made it to Italy. Some expiring frequent flyer miles and a quick decision finally changed that in 2003. I went alone, which is the best if you want to see as much as possible in short time and take photos. Most well known sites are withing walking distance, except for the Vatican state, where the subway is suitable. This became a trip of history, but Rome is also very nice just to wander around and watch the daily life and use the many cafes on the street. One day I want to come back (with better time) and enjoy more of that. 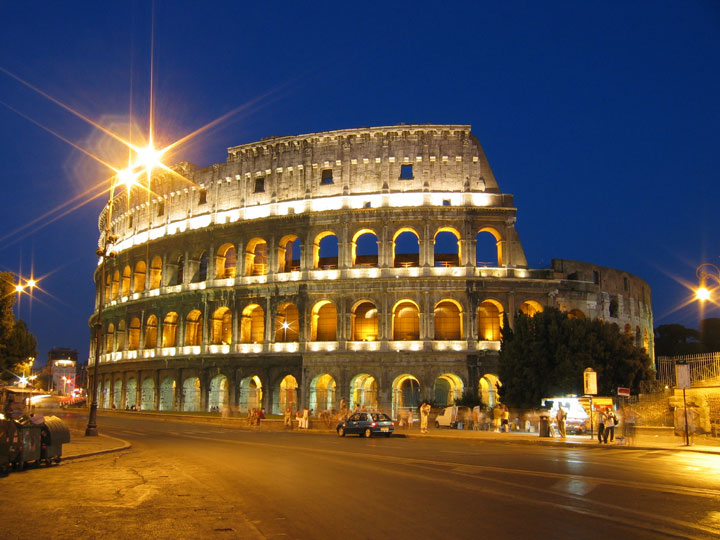 Colosseum, where the Christian gladiators had to fight wild animals almost 2000 years ago to entertain the Romans and their emperor. I think Colosseum looks better from the outside that inside, particularly in the "blue hour" during sunset. 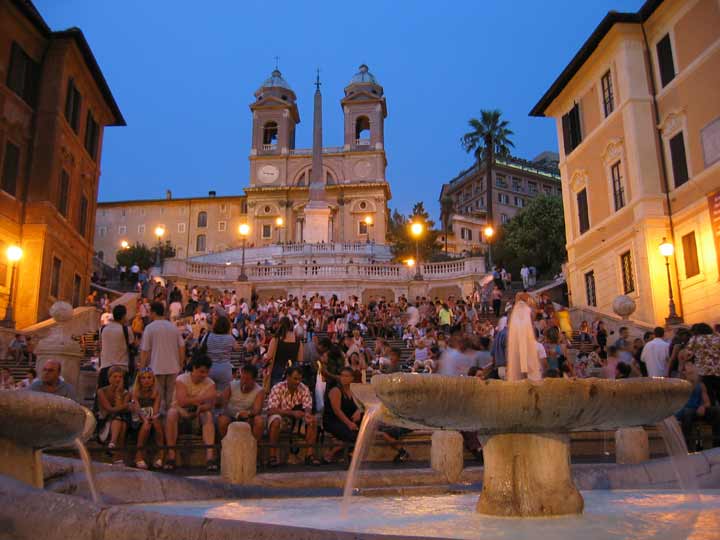 If you want to see or meet people, the Spanish Steps at sunset is where you want to be. Sunsets in Rome are really beautiful, and the old buildings get a photogenic glow in the last rays from the sun.

Rome if full of old, beautiful Catholic churches. Basilica Santa Maria Maggiore is one of them, and like most Catholic churches, they are open to everyone most of the day. I prefer to go during a ceremony, like here, but they are also an escape from the hustle and bustle outside at other times. Dress conservatively when entering these places, and be discreet with your photography. Digital cameras are great, as they can do it without making any sound. 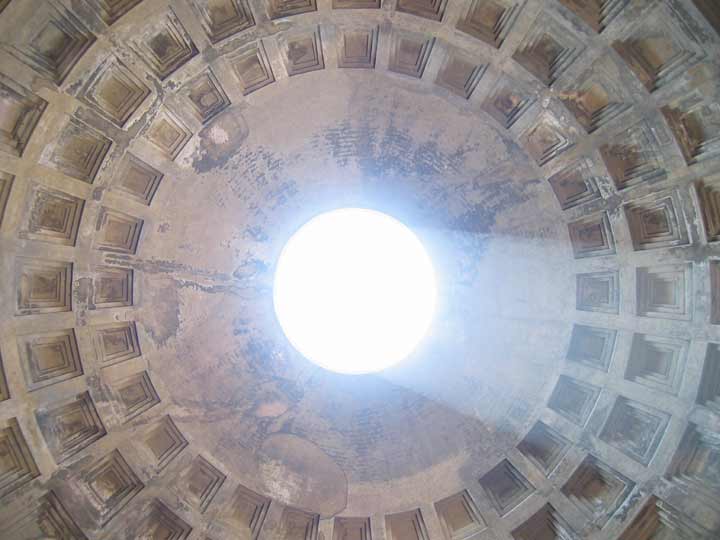 Pantheon is the most complete structure from ancient Rome, with no significant damages. It is used as a church today, but because of it's history it is a very popular spot with tourists. The light coming through the ceiling was fascinating, but a guard (security?) did not like me leaving the camera on the floor for these shots. As always with photography, it's easier to be forgiven than to get permission.

This looks like something from ancient Rome, but isn't. It was built as a monument to King Victor Emmanuel about 100 years ago. It is huge, and some say ugly. Because of it's shape, some refer to it as the typewriter monument. Entrance is strangely not on the large sairs in the front, but through a small door on the right side. There is a little museum inside. 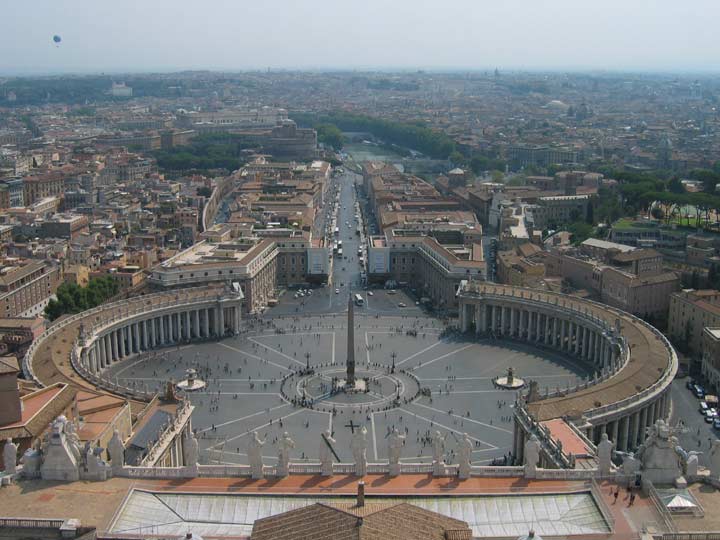 After waiting about one hour in line and paying a few Euros, you get the chance to climb to the top of the dome of St. Peters Basilica. Normal, fit people will easily walk the steps, but if you are lazy, you can wait a bit more (and pay a bit more) to ride the elevator to the main roof. Here you can also find a small souvernit shop and refreshments. The climb onwards to the dome itself is by narrow, curved steps only. The reward is this magnificant view of Rome and St Peters square. 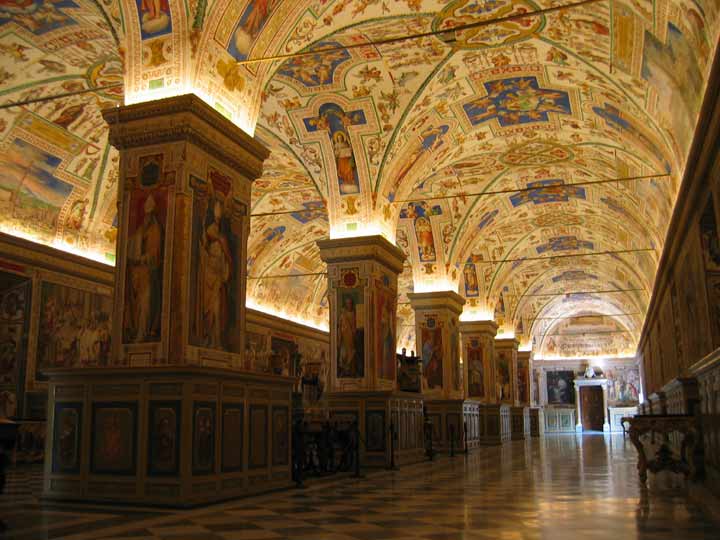 The magnificent interior of the vatican state must be experienced. This is where a lot of European wealth went during the 1000 years of the middle ages. Be there early in the morning to line up in the LONG queue ( 4 hours?), or be as lucky as I was. I skipped the queue, and came back close to closing time, and found that opening hours was extended by 2 hours. Not long time to see the Vatican museum, but I had it almost to myself (relatively speaking). 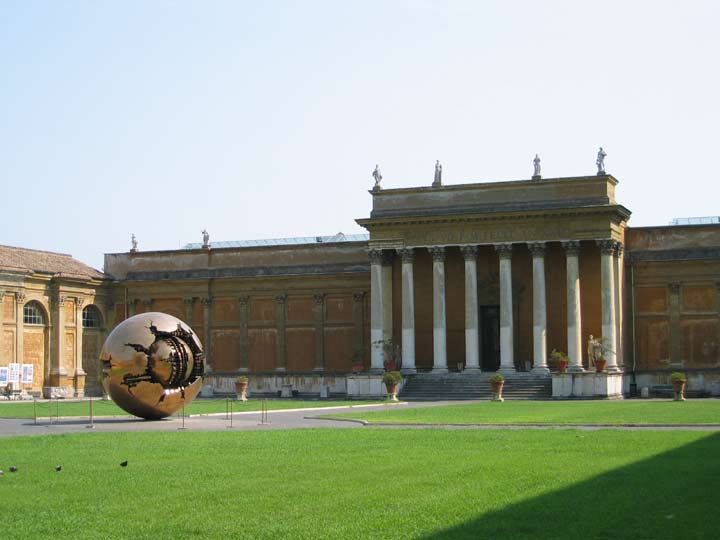 There are some enclosed squares within the Vatican. The modern sculpture in the middle was an interesting contrast to the old buildings around. Opinions are certainly different, but I liked it. 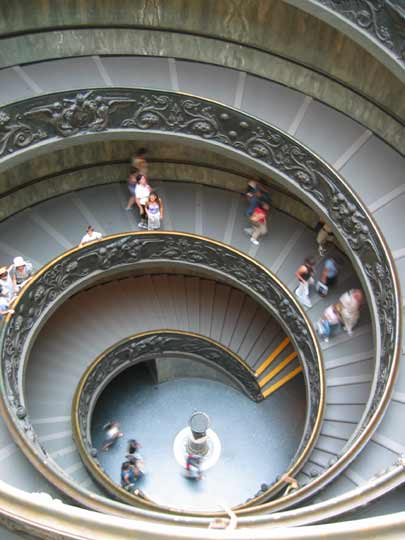 Interesting design of these stairs in the entrance of the Vatican museum.