The United States is the worlds best place to travel by car if you don't mind the long distances. This is from different trips while I lived in Houston, and from an earlier trip to Florida. 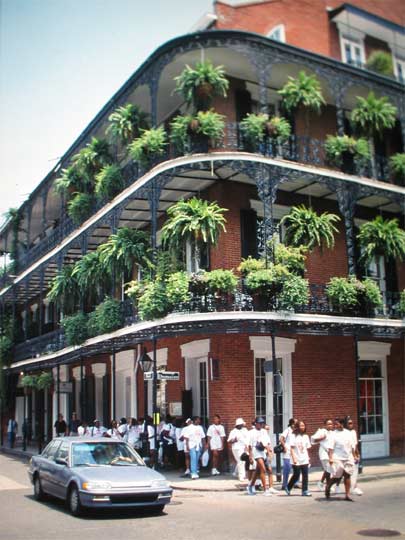 New Orleans is one of the nicest big cities in the USA, and certainly the best for a great party week-end. This house is typical for the French Quarter. 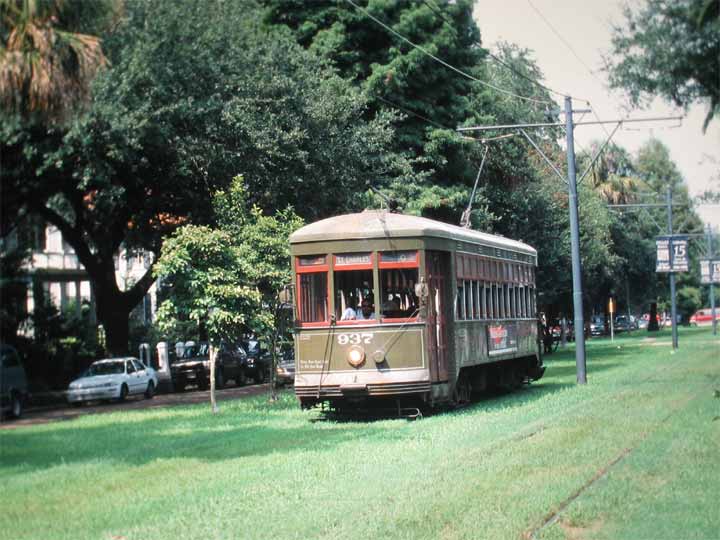 These old street cars have now become a tourist attraction in itself, and a typical New Orleans sight. Riding these through some of the welthiest and nicest neighborhoods in New Orleans is a relaxing thing to do after a night of partying. If you like old, fine buildings, it is a must. 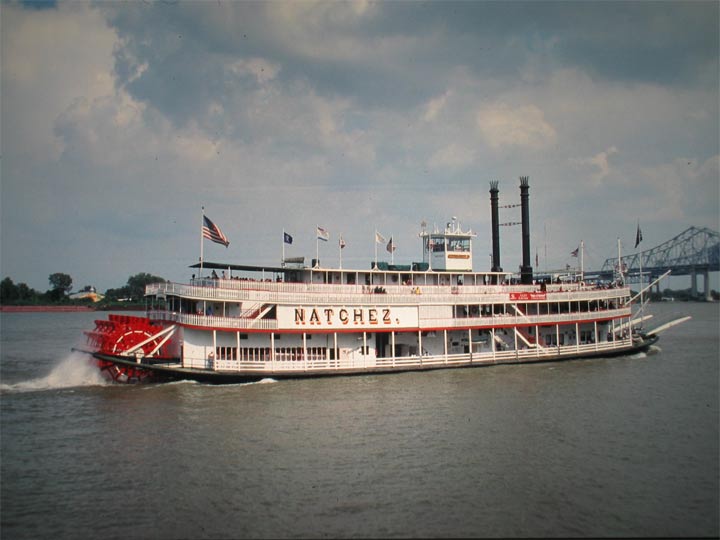 The paddle wheeler Natchez is one of many offering small tours on the Missisippi out of New Orleans. What makes this one special, is that it is the only one using a real steam engine. If you choose to go on a paddle-wheeler, go on this one! 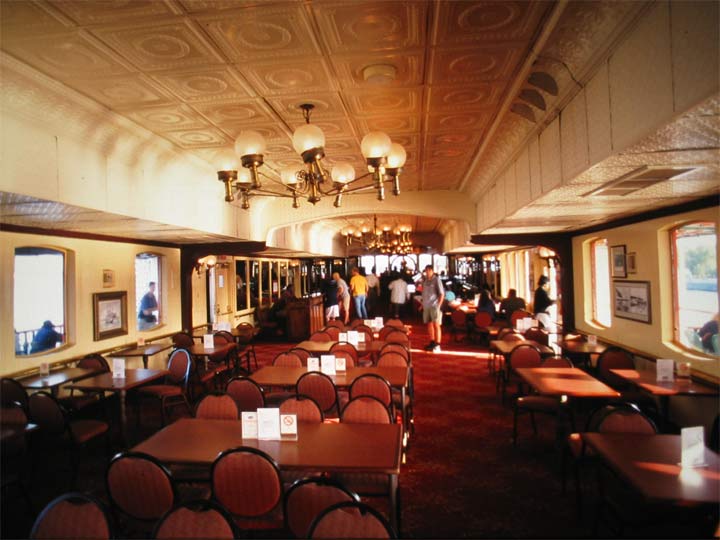 Nice, old fashioned interior of the Natchez, but the boat is not old. None of the old paddle wheelers have survived, many lasted only a few years before they exploded or caught fire as a result of steam engine failures. The food served on this trip was the typical below average mass produced type served on large tourist outings. Consider doing the trip without food, and enjoy one of New Orleans' nice restaurants afterwards. 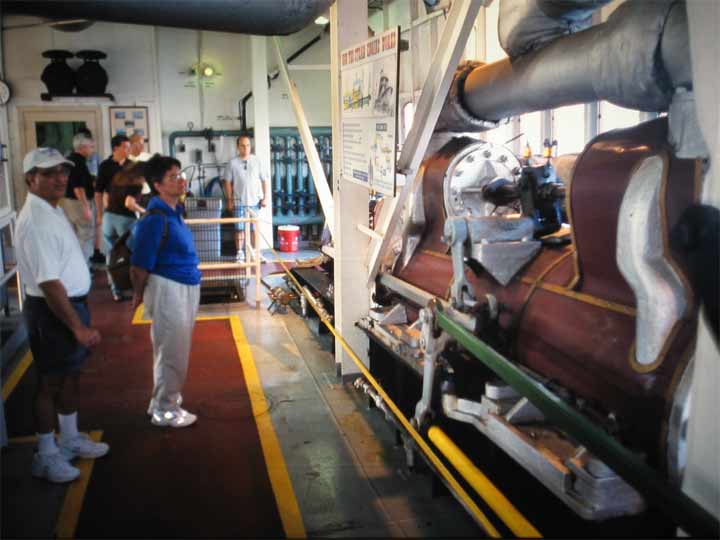 If you have never been on a ship powered by steam, you will be surprised how quiet it is. Conducting a normal conversation in the engine room is no problem. 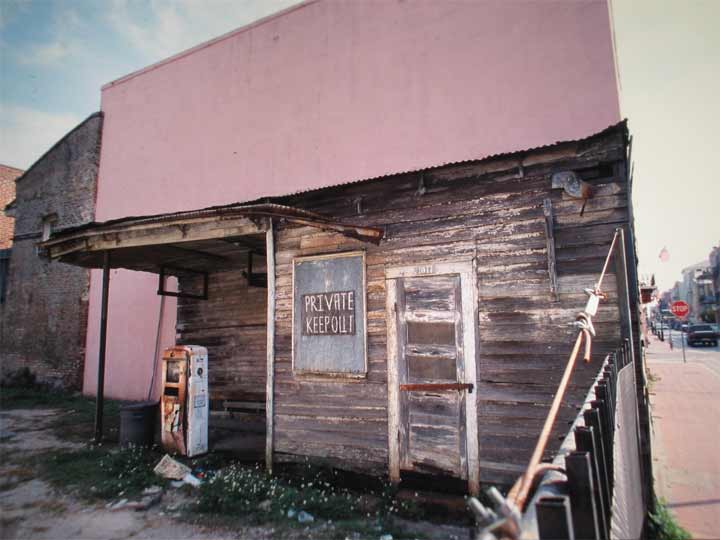 It is surprising how many run-down places you find in American cities without walking far from the most attractive areas. Why doesn't anybody take interest in developing this land? 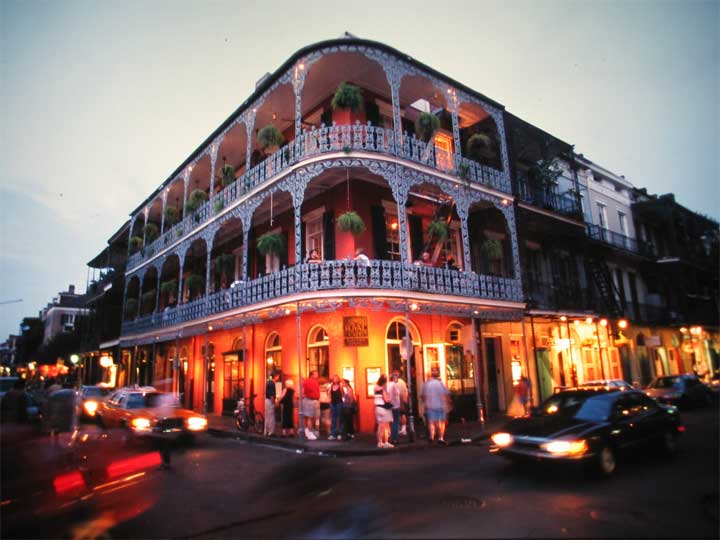 Bourbon Street getting ready for another night of partying. At 6pm, it is closed for cars, and is turned into a long strip of partying people, like an outdoor disco (Yes, most of the traditionsl jazz-clubs are gone). It is one of the few places in the US where it is allowed to drink in a public place. 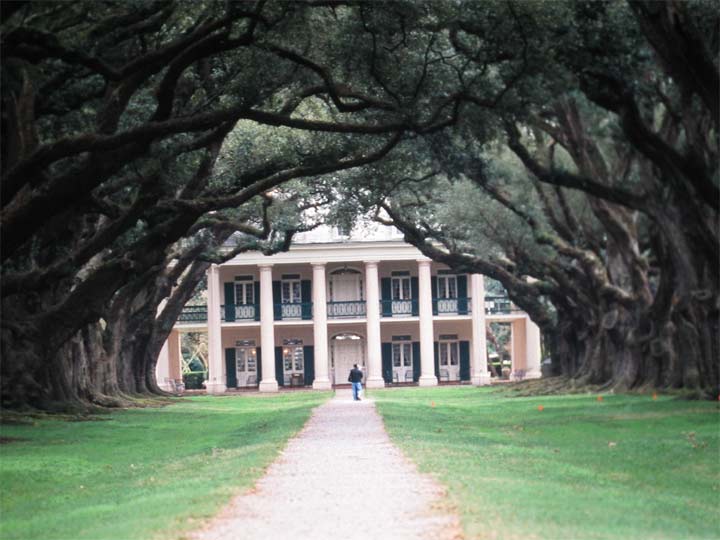 Many of the old plantations in the Southern US take overnight guests. Oak Alley is one of the more famous. This is in Lousiana, between Houston and New Orleans. 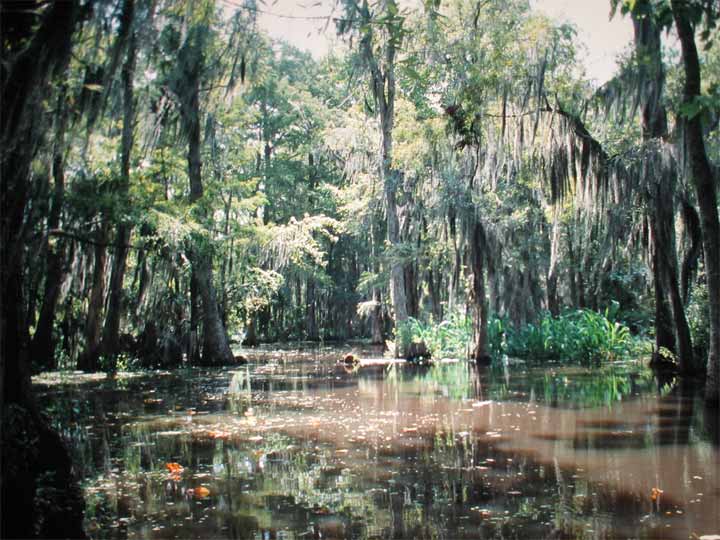 Swamp tours, and the Cajuns living in the area is a unique Louisiana experience. For tourists it is necessary to join an organized tour to see this. You would be crazy to try to explore this on your own. 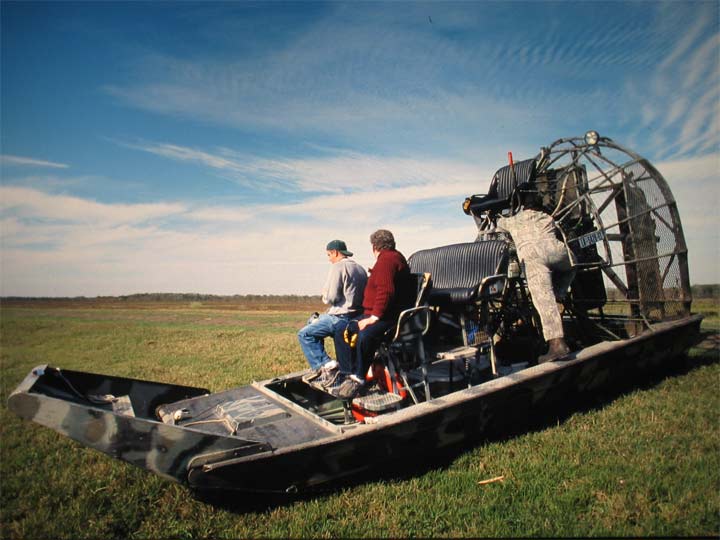 Airboat is the most fun way to move around the swamps, and they go really fast. Make shure your trip is with a smaller one like this (4 - 8 passengers), as they can go into narrower areas and allows better views. Some operators use bigger airboats taking 20 passengers or more. Airboats are noisy, so if you want to see wildlife that is not trying to escape, choose a boat powered by one of the modern, quiet 4-stroke outboards. 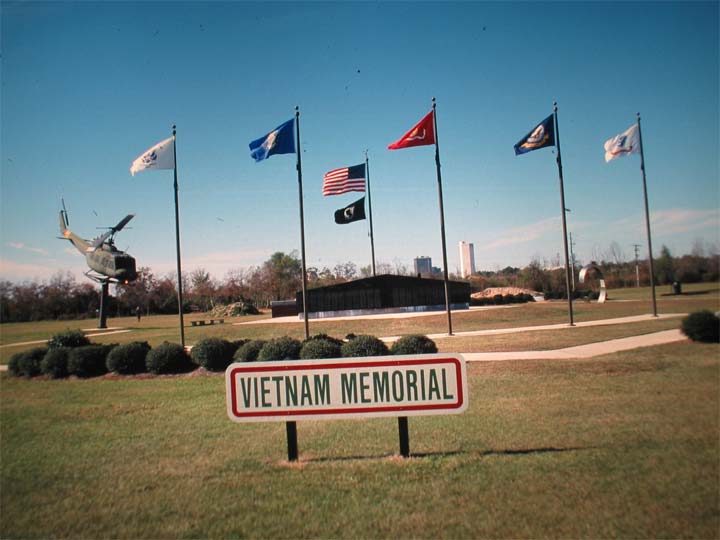 There is a lot of Vietnam memorials around the USA. This was one of the more interesting, as it also had a large collection of aircraft, and also an old battle-cruiser. 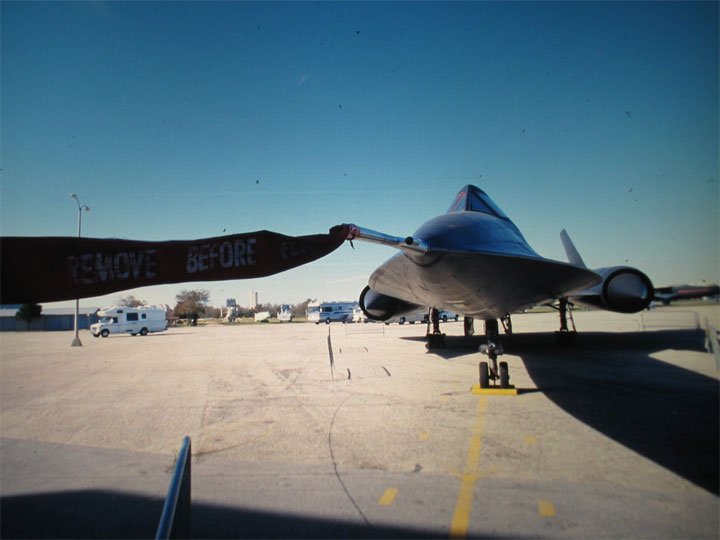 The Lockeed SR 71 high altitude high speed reconnaissance plane is the fastest conventional aircraft built. I belive it is about Mach 3.5, and that they are now taken out of service. I found the cloth pulled over it's sharp nose somewhat funny, as it says "remove before flight". Should be quite obvious to persons operating these. 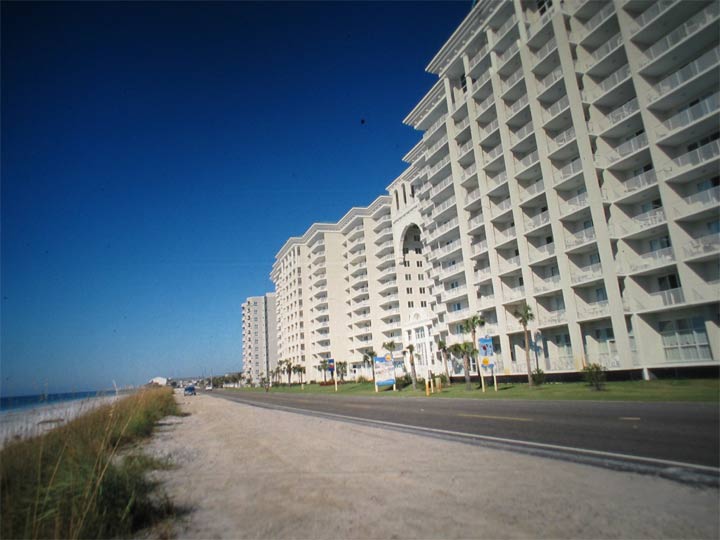 A very massive housing development on the west coast of Florida. I easily understand why many people want to retire in Florida, but choosing housing like this and no charming neighborhood nearby would not be high on my list. If the only thing you desire is a nice beach, this is the place. 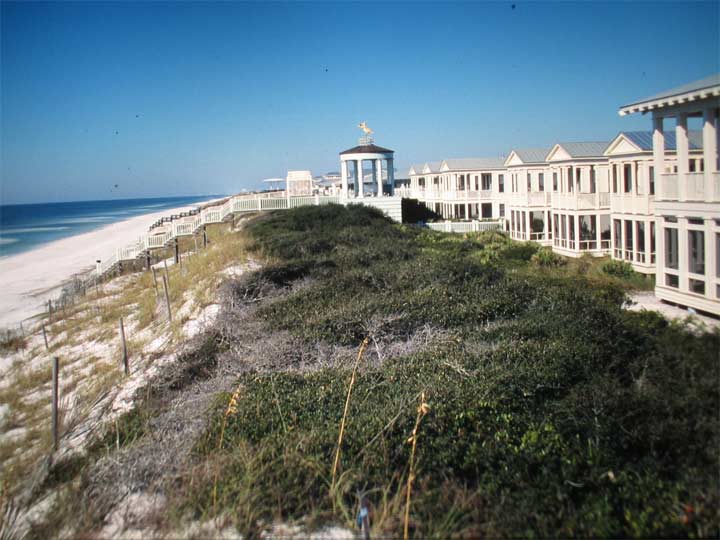 This recently developed area is much more to my liking. Being a distance from the nearest town, the only question is: Will it be too quiet when you want to do something else than sunbathing on the beach? 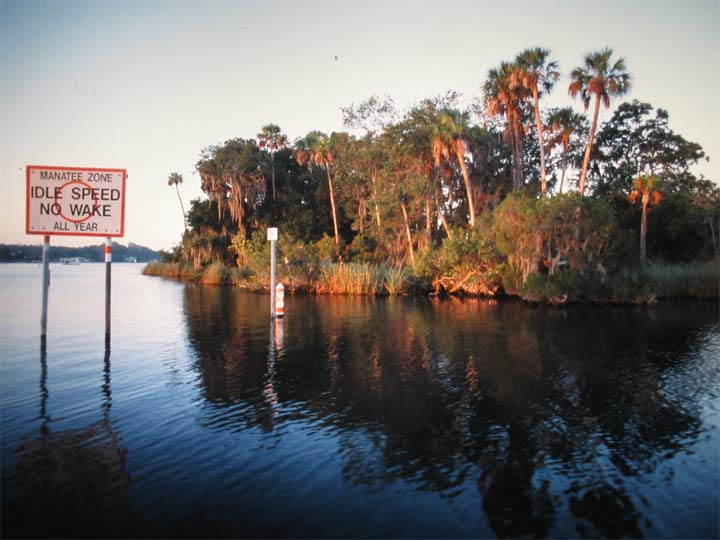 This is typical for the area where the endangered Manatee lives. Boat propellers kill a lot of these animals, as they are very slow moving, and like to swim near the surface. 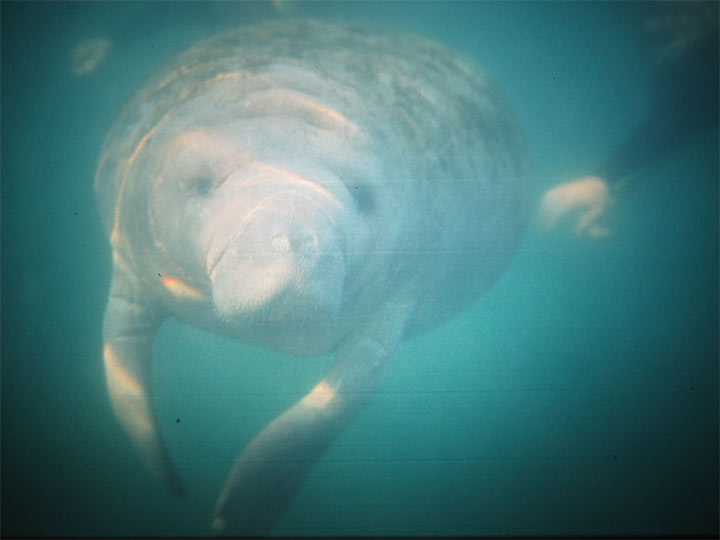 Swimming with Manatees is a special experience. Scuba bubbles scare them away, so snorkel, mask and fins is the best way to experience these fascinating animals. Stay quite still in the water, and these curious and friendly animals will soon approach you to check you out. You can scratch them, and if they like it, they roll around in the water. The picture is taken with a small submercible compact camera with manual focusing. 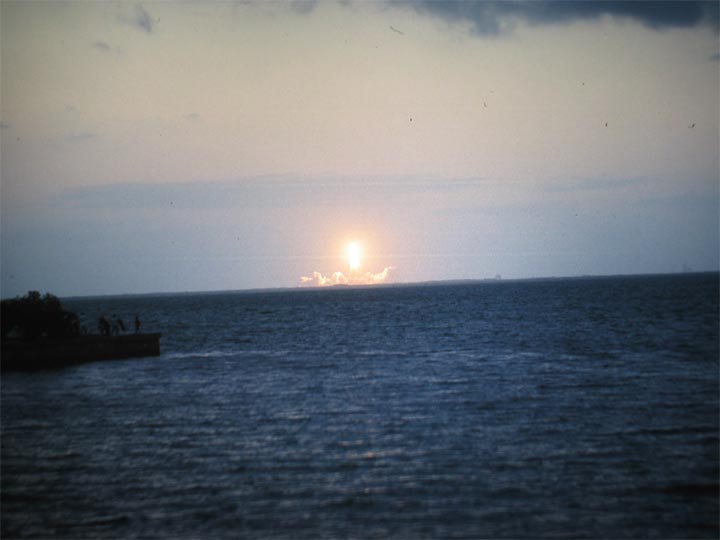 Coming to Orlando, I saw many people along the coast. I knew a space shuttle launch was planned a few days earlier, but it had been delayed, giving me the opportunity to see and listen to this for the 2nd time in my life. Some times you just have good luck - I had no plan for a stopover in Orlando, and the space shuttle had lift-off 4 hours after I arrived, and my journey could continue. 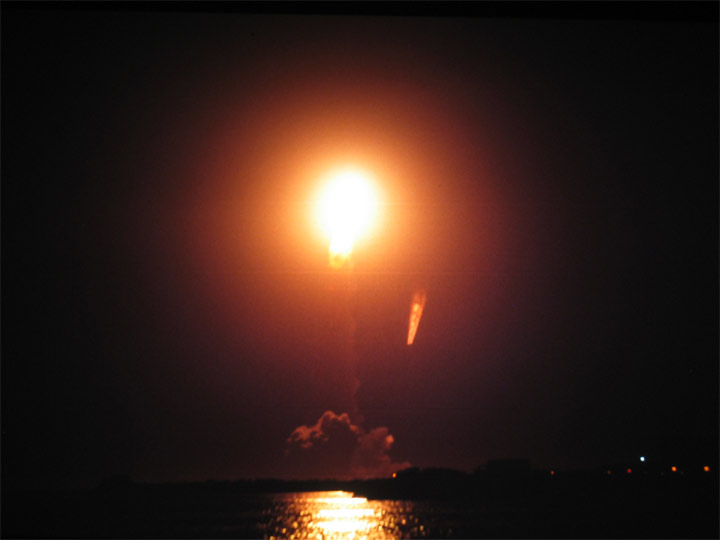 This was my 1st time witnessing the space shuttle launch, this time from within the NASA premises. The sound is incredible and cannot be reproduced by any sound system. It has to be experienced. This rare night-launch was spectacural, as the weather was crystal clear, and we could see the flame from the space shuttle engines for several minutes after take off, that is, after it had reached orbit. 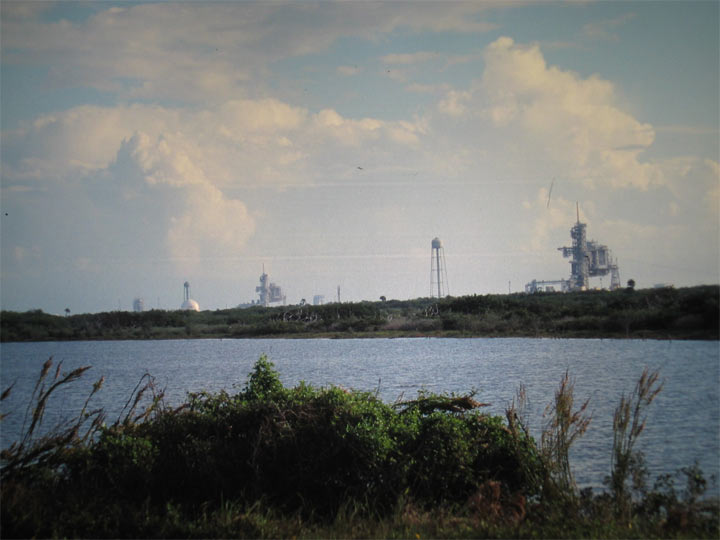 Due to the potential risks of space craft launches, a large safety zone exist around Cape Canaveral. Nobody lives here, and it is completely closed for people a few days before a launch. Recreational areas opens immediately after a successful launch, and the following morning we went to this beach. This is now a large refugee for wildlife, and it is fair to say that around here NASA is natures best friend. Wildlife doesnt seem to be affected much by the occasional roar from the rockets.

Swimming here is not recommended. One guide advised not to feed the alligators, while another demonstrated that alligators are crazy about Marshmallows. 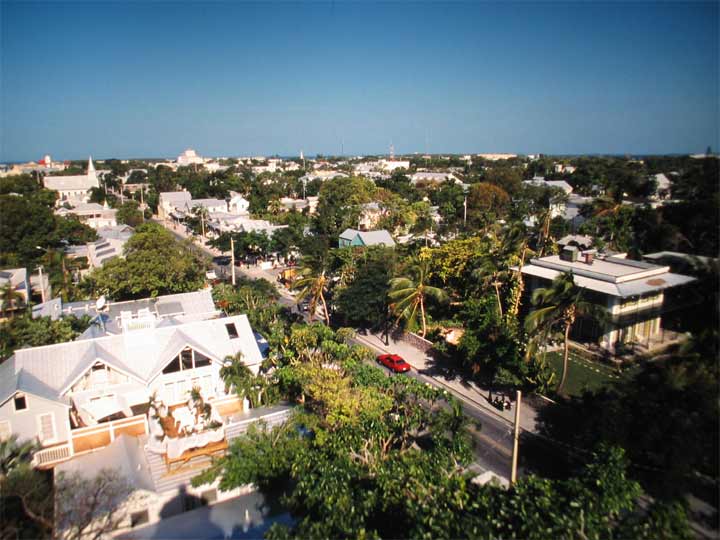 Key West is the southernmost point in the USA where you can get by car. It is a very nice little town, and the hometown of the famous writer Ernest Hemingway. You can see his house to the lower right of the picture. The picture is taken from the lighthouse in Key West. 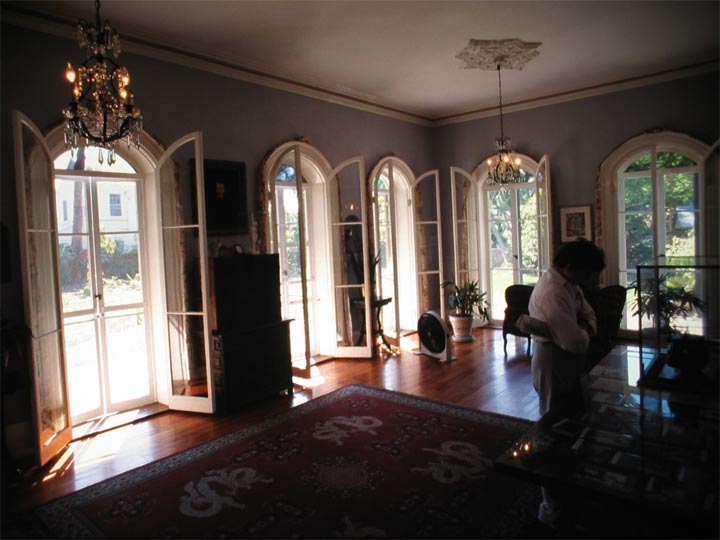 Hemingway's living room. His home is now a popular museum, and is also famous for all the cats living around the house. An interesting visit even if you are not a keen Hemingway-fan. 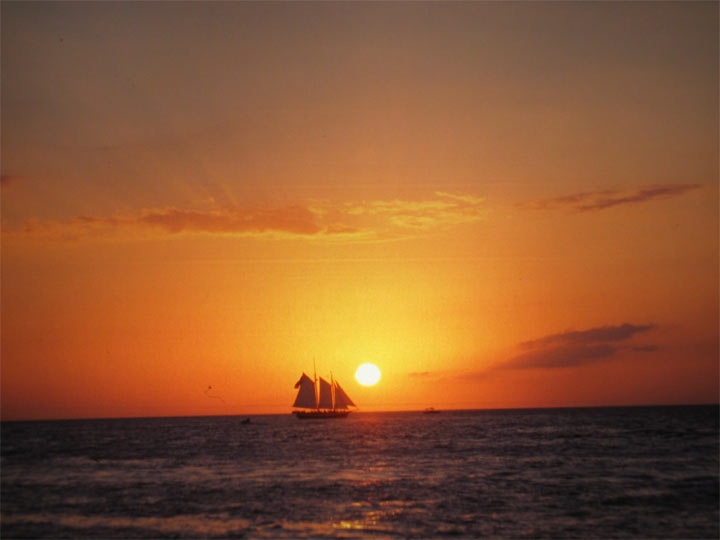 Nice sunsets can be seen on clear days, like this one. Luckily, an old scooner came by making the sunset a bit more interesting. 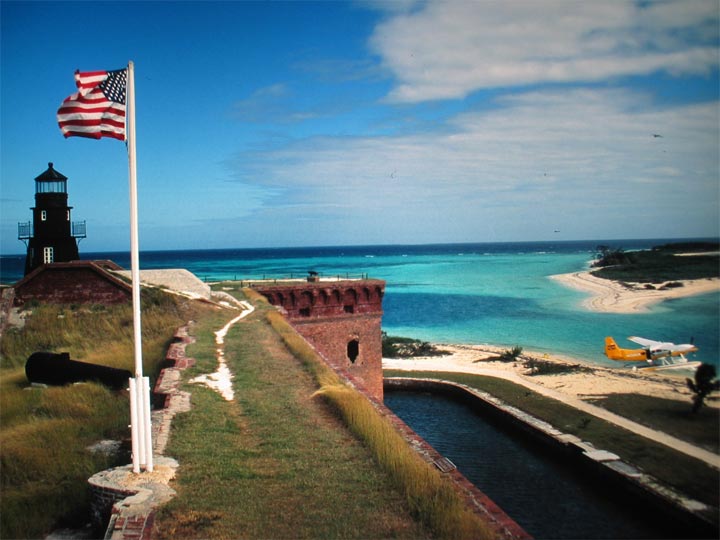 As close to Cuba as you can get without leaving the US. You need a boat or sea-plane to get out to the old fort at the Dry Tortugas Islands. Tortuga means turtle in Spanish, and the islands look like turtles in the water. Fresh ware is scarce on the islands, so it became dry tortugas. This is a nice relaxing day-trip from Key West. Great snorkelling, and walking around the fort is also nice. 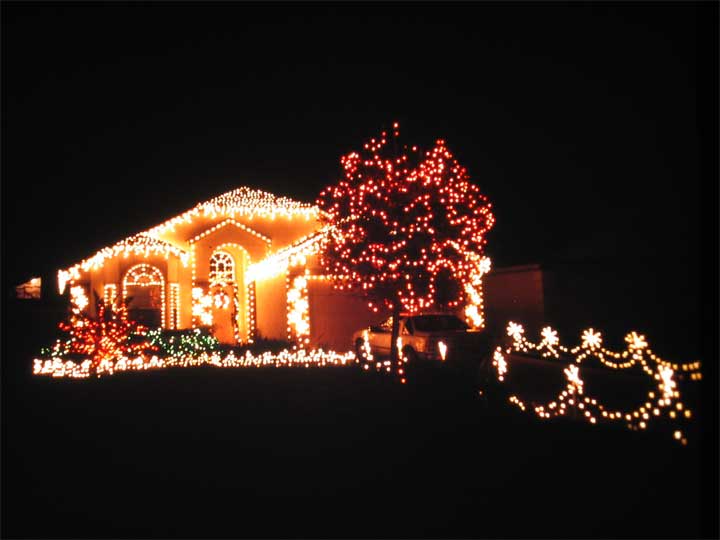 Americans, like many others like to decorate with lights for Christmas, even if most doesn't make it this extensive.