Svalbard is one of the northernmost land areas on the planet, but still easily accessible for ordinary travellers. It is located about 1,5 hours flying north of northern Norway, and has a modern airport that receives a daily Boeing 737 from Norway. The archipelago is governed under Norwegian law, but persons and businesses from all countries that have signed the Svalbard Treaty has equal rights to be there and do business there. Tourist business is expanding, but you need to make some preparations and get some knowledge up front to enjoy it better. Some hints can be found in the following text. 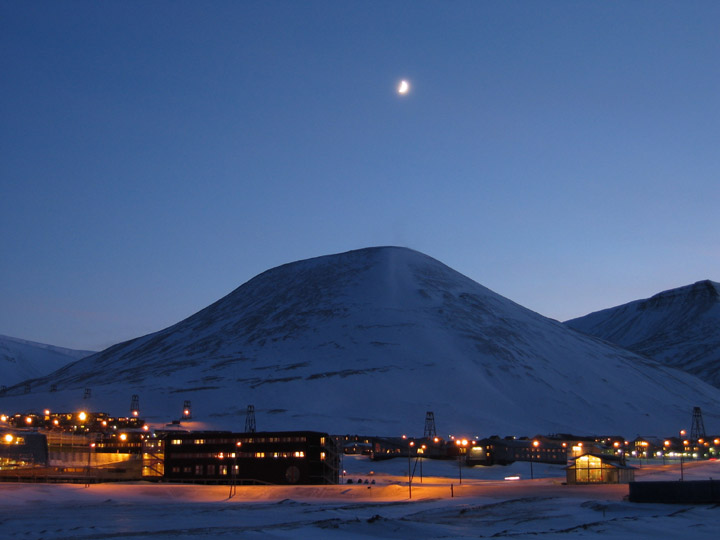 I visited Svalbard for 4 days around 10 February 2005. The sun appears for the first time in the new year at this time, but there is about 4 hours of good daylight. Twilight is the norm most of the day. This is very early in the tourist season, and should I come again in winter, I would come a month later. You will get more sunlight and longer days, while still experiencing the arctic winter. It will also be easier to find organized activities, as most were canceled in mid February due to few participants. 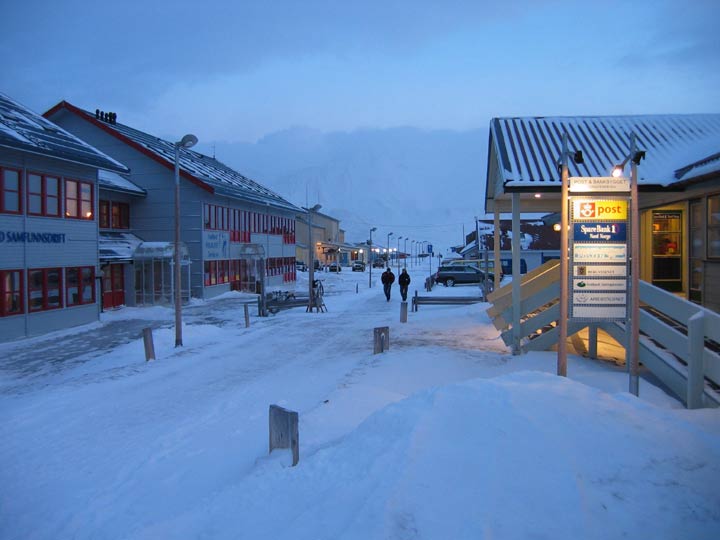 Everything in Lonyearbyen is within walking distance, and this main street has a number of shops and restaurants. You can easily do it all in one day. 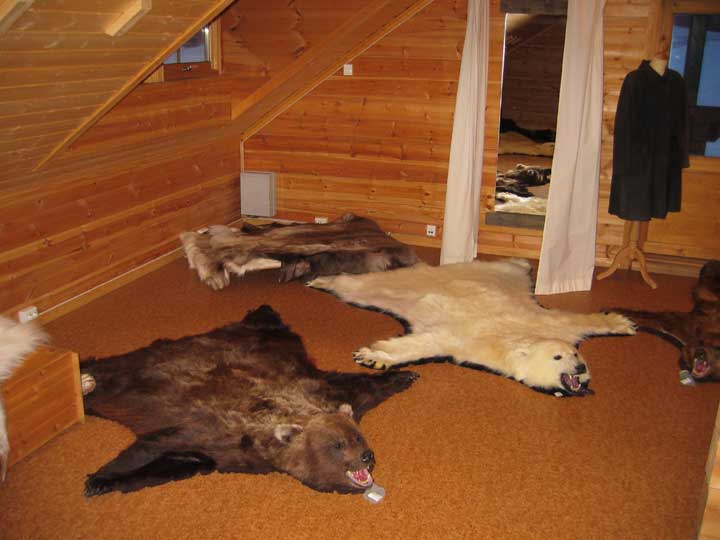 The skins from polar bears are from Canada, as those on Svalbard are protected from hunting. They were for sale here at around NOK 30 000. 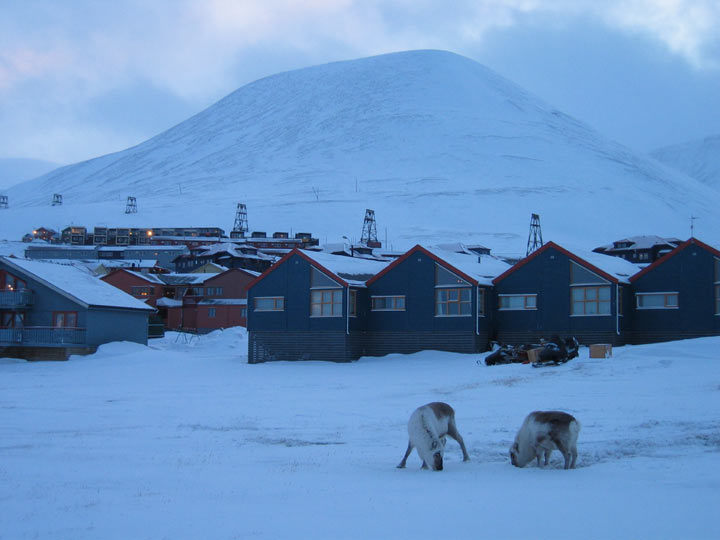 Arctic raindeer are specially adapted to the harsh condisions here, and try to find some food on the frozen ground. They allow you to get quite close, but you should not chase them, as they need to preserve their energy during winter. These were observed on the outskirts of Lonyearbyen. 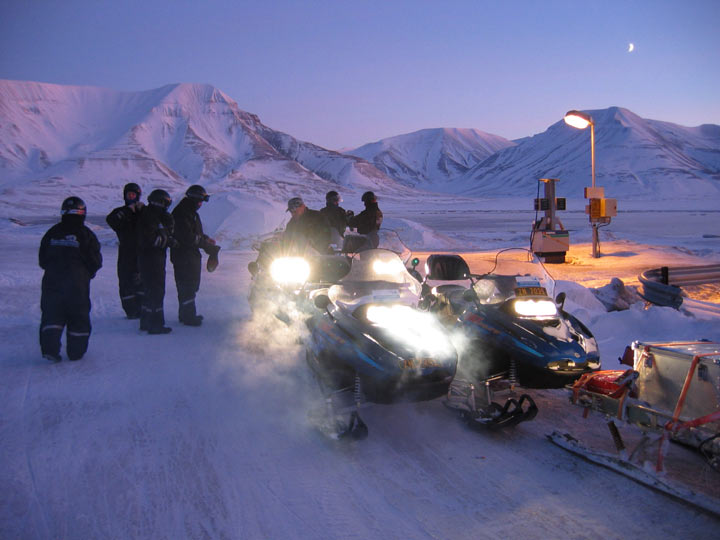 I only got one day of proper exploring of Svalbard outside Lonyearbyen itself. As an ordinary tourist, you need to go with a group or guide equipped with proper safety gear, knowledge of the area and a gun for defense against polar bears. I had contact with a small one-man tour operator called Poli Arctici, and before arriving at Svalbard, he told me he would be able find interesting activities for me. When I arrived, I was very disapponted that he had no intention to do so (I rented a small studio apartment from him, with the understanding he would also arrange or assist in finding activities). Walking around Lonyearbyen looking for something to do, I came across a large tour operator, Spitspergen Travel, and yes, they had a day-trip on today if I could be at Svalbard Snřscooterutleie in 15 minutes. Luckily, I was all geared up, and soon found myself here ready to go. 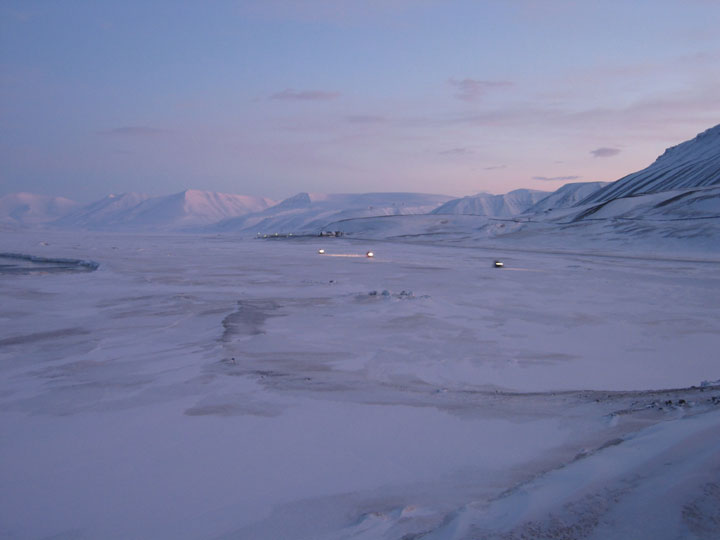 Other snowmobiles returning from an adventure. Activity in February was very low, and all tour operators have a cancellation policy. Even if you signed up months in advance, they may cancel on short notice if participants are too few. If I ever return to Svalbard, it would ideally be with a group of 4 - 8 persons, and have arrangements agrreed and comitted by a tour operator up front. This is absolutely necessary if you plan overnight trips. 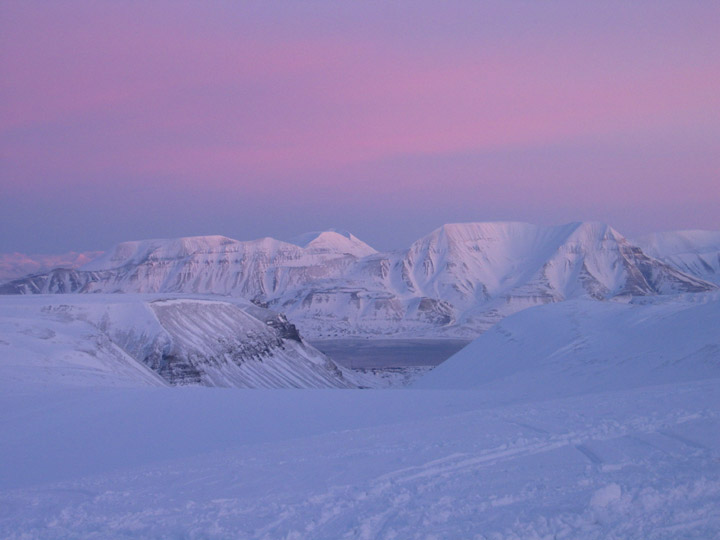 The snowmobiles and our experienced guide first took us up to the hills above Longyearbyen for a beautiful view in the typical colors found in the arctic at this time of the year. 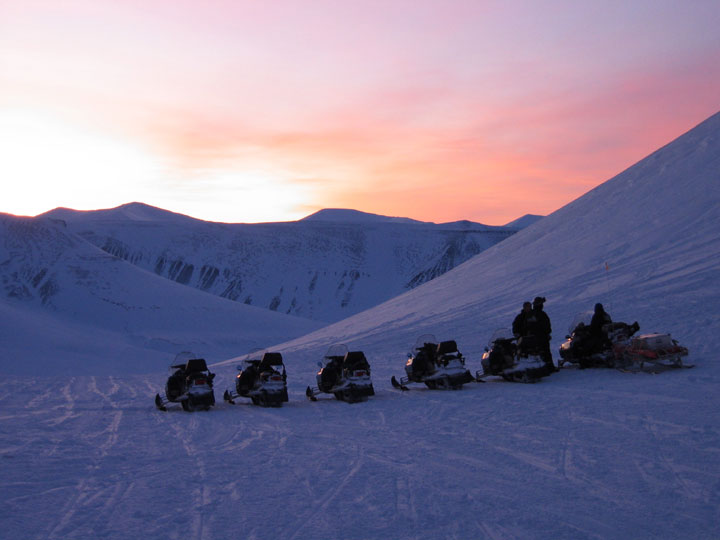 The day is on the short side in the arctic in February, and a colorful sunset was in view before arriving at our destination: The Russian mining settlement of Barentsburg, about 60 km (40 miles) frokm Longyearbyen. Note the snowmobile to the right. It is hauling a sledge with safety gear in case of an emergency. On this, the guide had equipment, including a tent, to survive several days out in the wilderness in case of an emergency. Even shorter outings on Svalbard need to be well prepared to be safe. This outing certainly was. 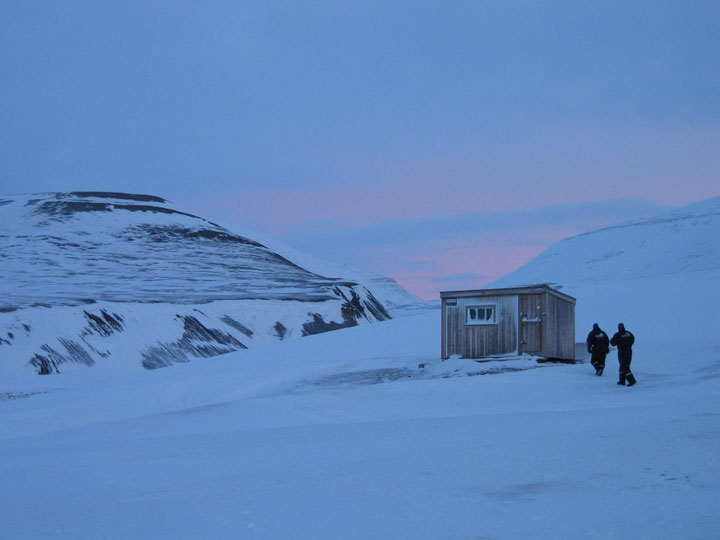 A few individuals still spend the winter at Svalbard in a lonely hunters cabin like this one. Today, most people on Svalbard prefer the comforts of Lonyearbyen. 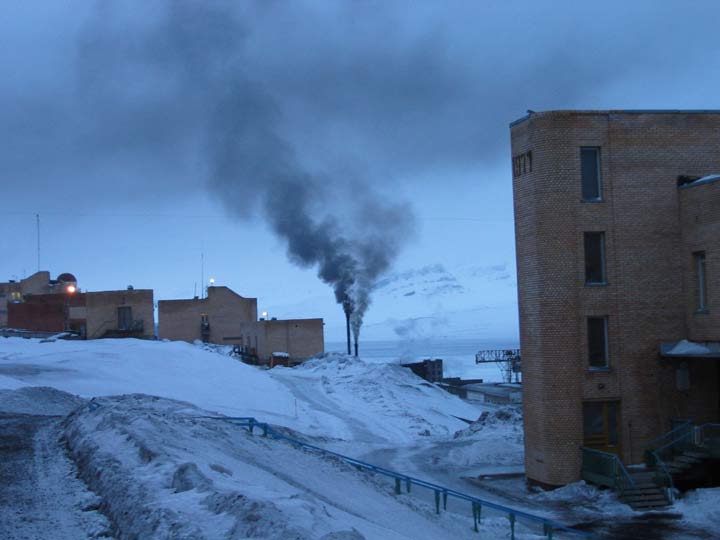 Obviously, cleaning of emmissions is not a big issue with the Russians, judging by the smoke from this coal fired power station in the Russian mining settlement named Barentsburg. About 1000 people live here, and it is the only major settlement on Svalbard in addition to Lonyearbyen. 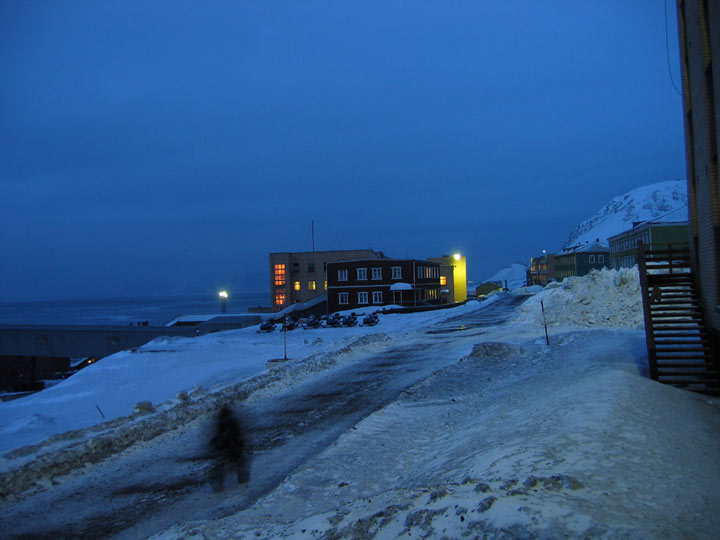 Barentsburg is an old settlement, and it has a number of wooden houses typical for smaller Russian cities in cold areas. The Russians have their own green-houses, and we also saw a farm where they kept pigs. It seems the Russians can survive for a long time without supplies from outside, while the Norwegian dominated Longyearbyen rely on supplies arriving on the daily flight from Norway. At this time, light was getting dim, and on our way home it got dark. We observed and trailed som polar bear tracks, but a snow-fall put an end to that. Thanks to Svalbars Snřscooterutleie for a well organized day-trip to Barentsburg and a guide that was also prepared to throw in an extra detour. This trip is an excellent introduction to snow-mobile riding with an interesting destination, and my no. 1 recommendation for the first time visitor to Svalbard in winter. 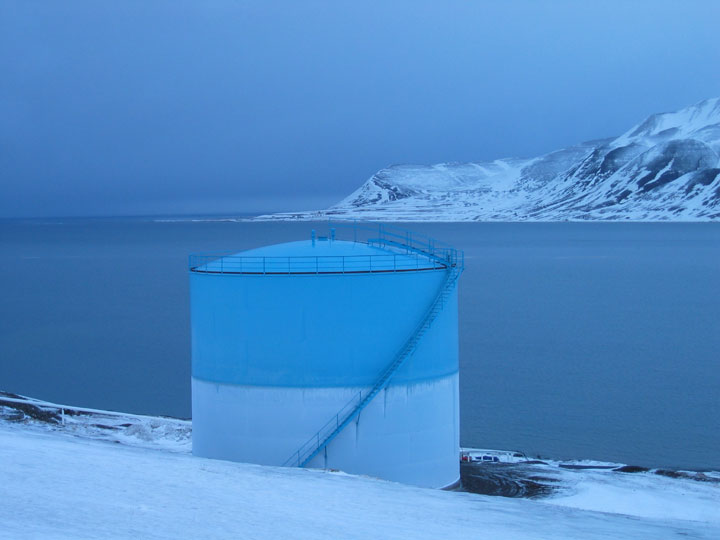 An oil-tank painted in colors to match the surroundings. Lonyearbyen has a port used by fishing boats and small freighters.

One day we had extremely mild weather for the season, but the rain soon froze to ice on these rocks on the beach. 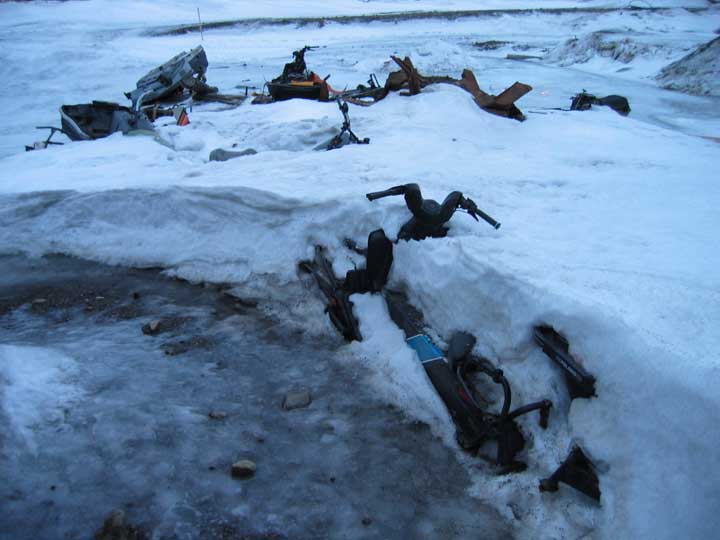 Seems typical for the arctic that stuff not longer needed are just left to rot, like these snowmobiles found near the port in Longyearbyen. 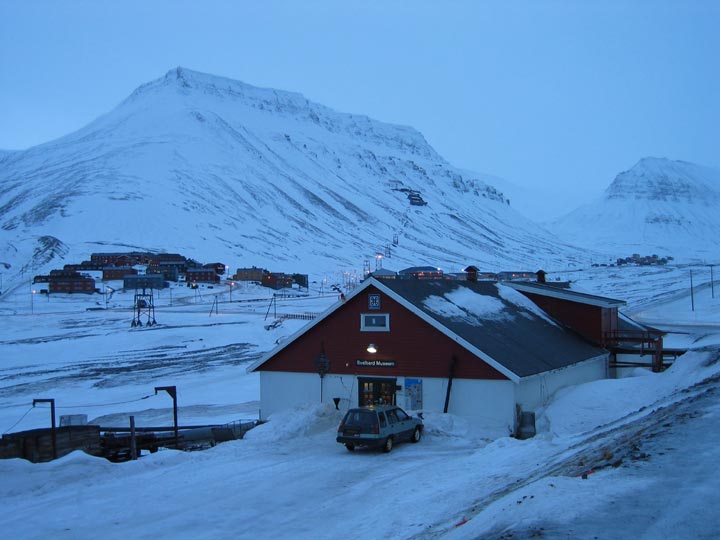 I believe the Svalbard Museum is the most interesting visit to make for tourists inside Longyearbyen itself. It is presently (2005) in an old barn, but soon due to move into a new building. I suspect it may loose some of it's charm during that move. It's a perfect thing to visit if you experience a day of bad weather during your visit. Weather in the arctic is extremely unpredictable. 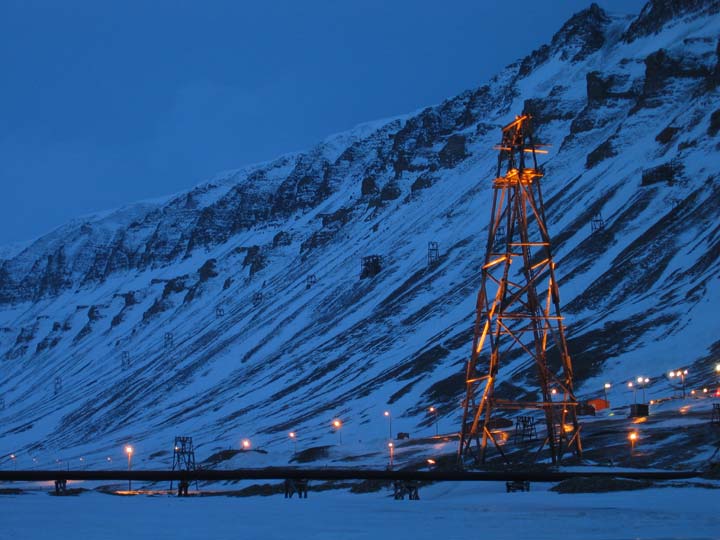 Around Longyearbyen you can explore a lot of remains from mining, like the cableways still hanging there (but not used anymore). This one was beautifully floodlighted allowing some interesting shots. 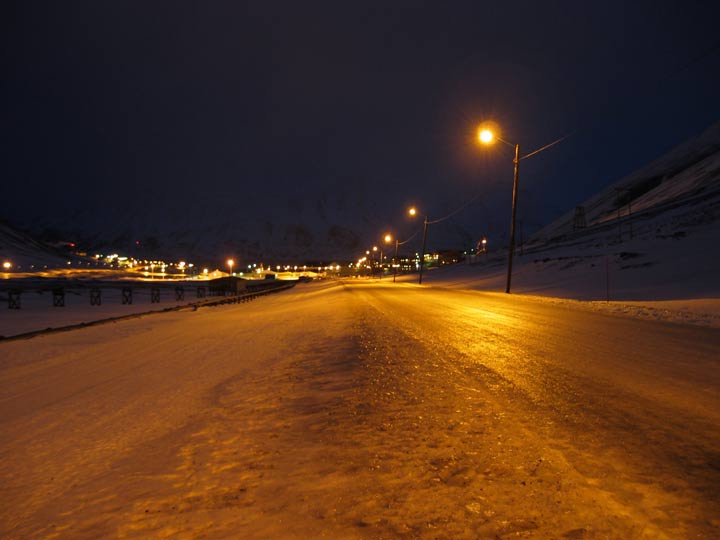 Longyearbyen has an upper part of town about 15 minutes walk from the main street. This icy road was connecting the two parts. The upper part doesn't offer much to see, except an interesting gallery of paintings. They also featured a slide show with pictures from Svalbard by Frans Widerberg when I visted. The pictures were beautiful and honest to the Svalbard nature, but they had been digitized and presented on a computerized projectors, with resulting quality limits.

My recommendations for a Svalbard visit: Travel in a group of 4 - 8 people and make deals with tour organizers up front. With 6 people or more, it should be possible to get commitments from tour organizers to arrange the trip (weather permitting) without having to depend on additional guests. Teams with some arctic experience should look for overnight trips. Those without experience should stay in Longyearbyen and do guided day-trips, and stay for at least 3 full days in case weather doesn't coperate. Single travellers must depend on available spaces on day trips that do have enough guests signed up. This normally doesn't happen until a day or two before a trip. Overnight trips are usually booked in advance, making it possible for single travellers to plan these before arriving.