Singapore is an exciting place where many cultures meet, and still it is well organized, safe and clean. A friend called it "Asia Light", because you can enjoy the different Asian cultures, but still maintain a western lifestyle. English is the main language, so it's easy to get around and communicate. So many friendly people, and many interesting things to do and see in Singapore and also nearby. It's a shopper's paradise, all the latest at good prices. Possibly the world's largest selection of merchandise. Malaysia is a short drive away, Indonesia a 1 hour boat ride, and much more. See also the "Special places" section for something on Pulau Ubin, a small island belonging to Singapore. I hope I can come back one day.. 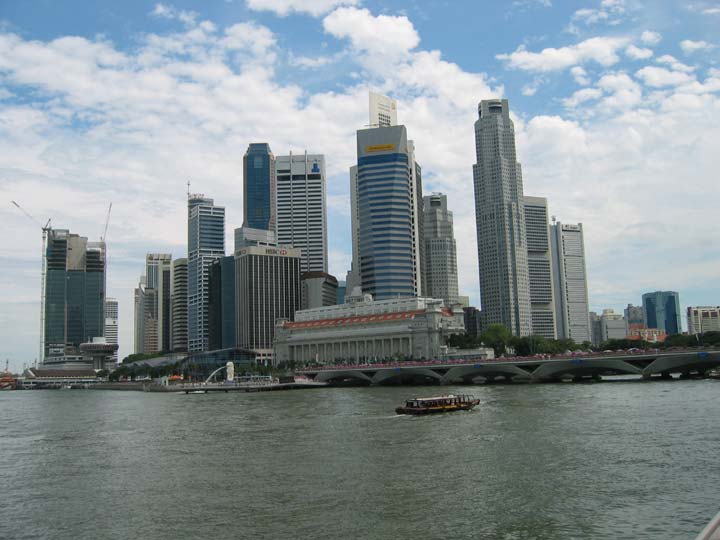 The famous and modern Singapore skyline. But you will find traditional ethnic neighborhoods near by: Chinatown, Little India and a neighborhood with Arabic history. 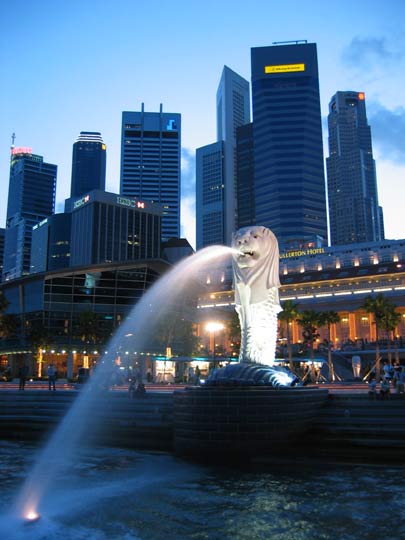 The Merlion is the symbol of Singapore: Half fish, half lion. An early discoverer thought he saw a lion on the island where Singapore is today, and it got the name SingaPura = Lion City. Thanks to Warren for lending me his tripod, allowing me to take this picture. 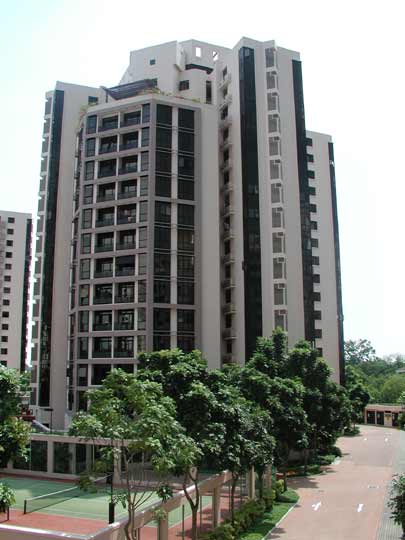 I lived on 12th floor in this building, sitting in a beautifully landscaped park with several pools, barbeque spots, tennis courts and even a little putting green. It is in Dover Rise, west of Singapore center. 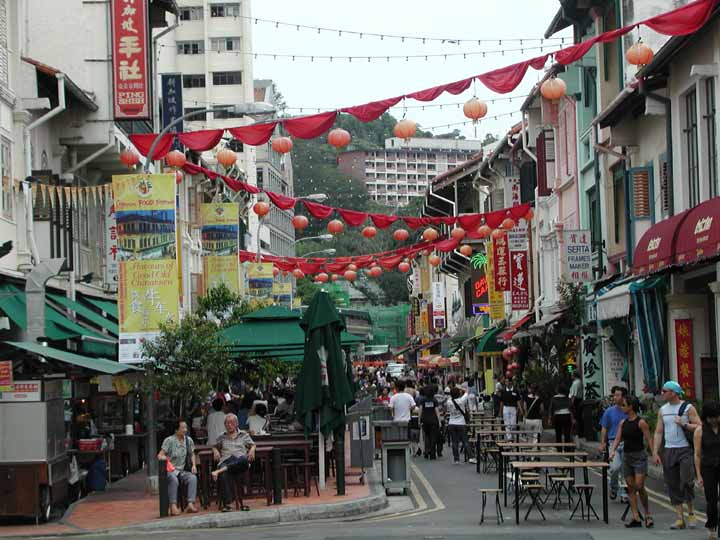 Chinatown is popular with tourists and locals alike. It is the largest etnhic neighborhood in Singapore, not strange since the chinese is the major etnic group. About 70% of Singaporeans are Chinese. If you are looking for a special shopping tour, this or Little India is the place to do that. 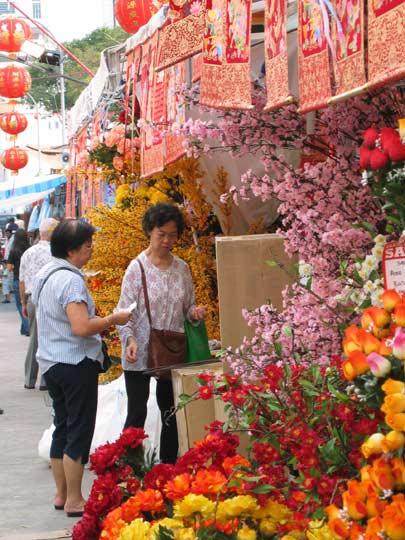 Ladies shopping for flowers in Chinatown during Chinese New Year, that usually is in February. 2004 became the year of the goat. 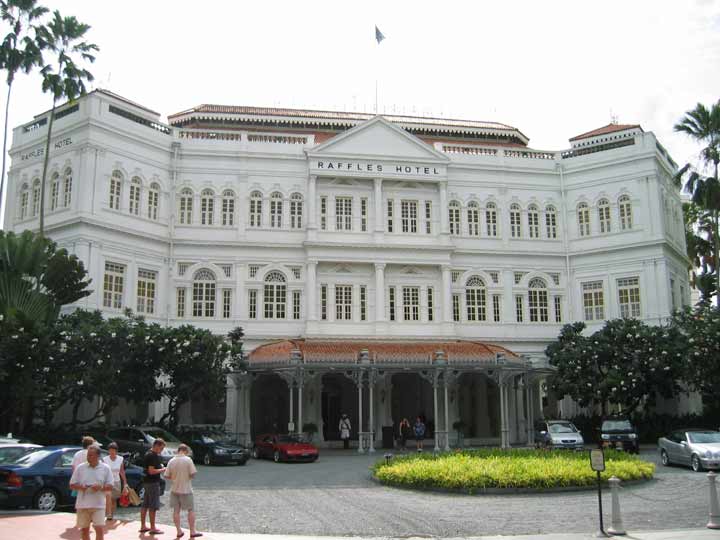 The traditional Raffles Hotel where the drink Singapore Sling was invented. The last tiger in Singapore is said to have been shot in the bar here in 1899. Very expensive, but the most traditioal hotel in Singapore. 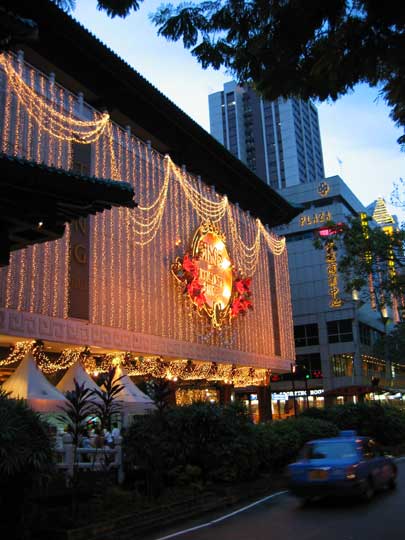 Orchard Road is the place to shop for fashion and international brand names. This is the department store Tengs dressed for Christmas. 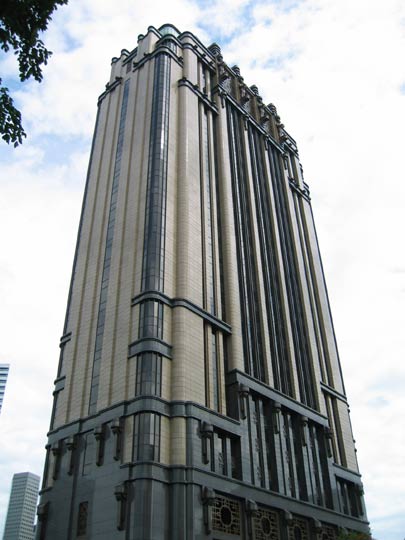 Singapore has it's share of ugly buildings, but there are exceptions, like this Art Deco building that was recently completed when this photo was taken in 2003. It contains regular offices, but has a fabolous looking gentlemens club on the ground floor. I was allowed a look, but no photos, please. Must have been an expensive project. 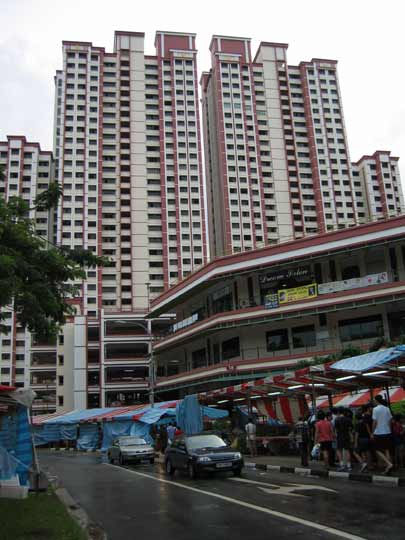 Of the more ugly buildings are many of these HDB blocks. The Housing Development Board is a public institution developing housing for the average Singaporean. They are built focusing on low cost, even elevators don't stop on each floor to save. Height is necessary considering the small size of Singapore and it's population. The advantage is that this porgram has provided comfortable housing for all Singaporeans, also those with low income. More than half a million such apartments have been built. 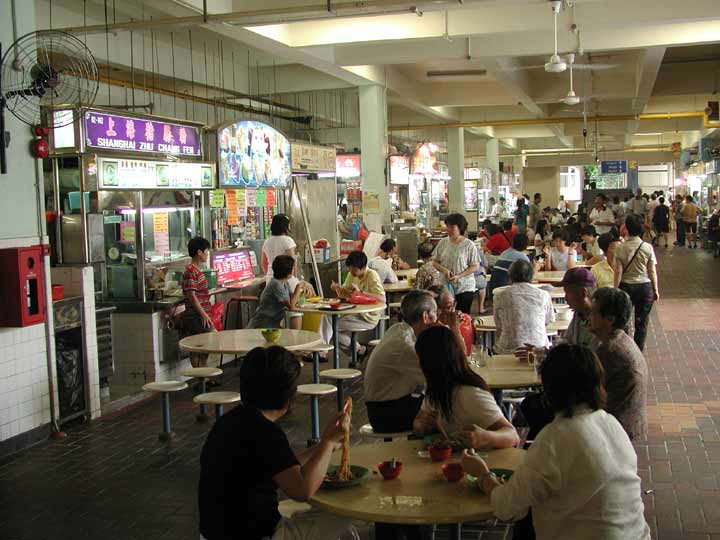 Hawker centers are food courts where all can eat, rich and poor. For less than 2 USD you get a good, warm lunch. You find them all over Singapore. No need to exhaust you travel budget on food in Singapore if you don't want to. 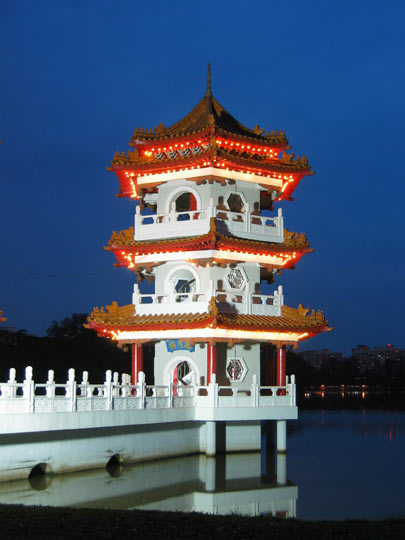 This pagoda is in the Chinese Garden outside Singapore. It's easy to get there with the subway (called MRT in Singapore). Chinese Garden is a relaxing place to wander around, it's nice and peaceful. In the center, there is also a Japanese garden complete with small bridges and Bonsai trees. 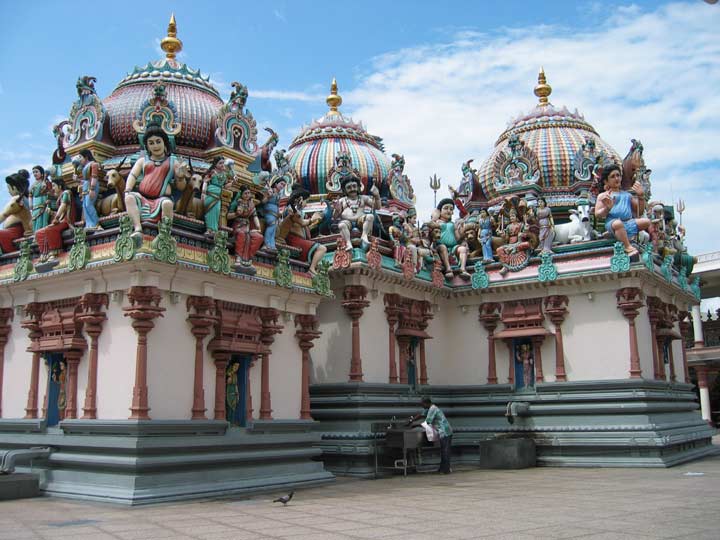 You are always welcome in a Hindu temple if you are descently dressed. This is the Sri Mariamman temple in Chinatown, one of the oldest and biggest. A relogion very different from Christianity, you should try to get there during a ceremony. 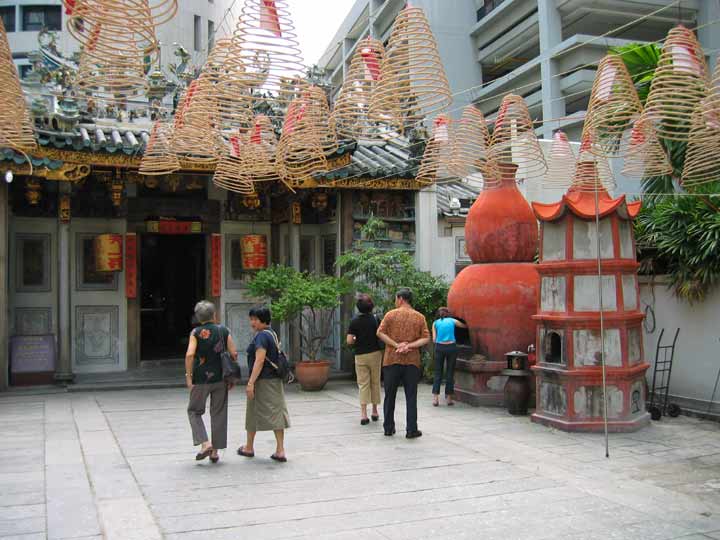 Some Chinese traditions belive burning fake money, paper cars and similar in these ovens will help prosperity and well being.

This is the Temple of 1000 Lights, called so because of all the lights surrounding this 15 meter (45 ft) high Buddah. A small but very interesting and nice temple. 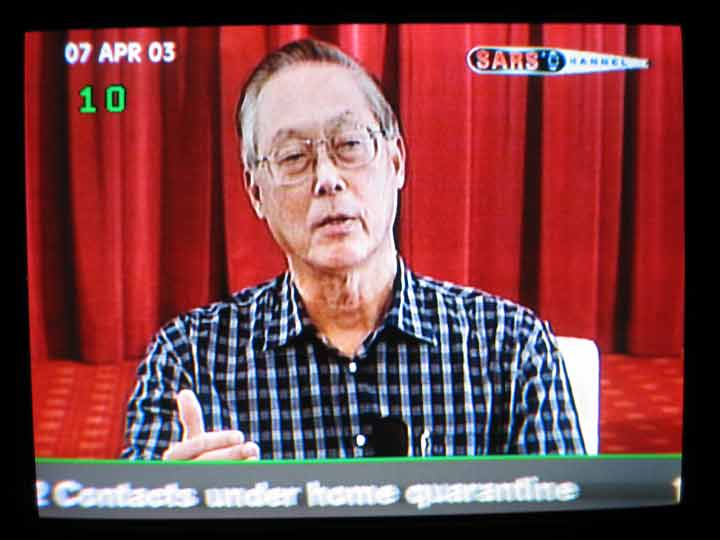 I lived in Singapore during the SARS disease crisis in 2003, that hit Singapore hard. Singapore took very effective measures, including this TV channel dedicated to SARS only. It was called the SARS channel, and you see Singapore's prime minister speaking. Thermography (Heat sensitive cameras) became common at the airport, ferry terminals and even in office building. Everybody living in Singapore at the time received a free thermometer.

These monkeys in Bikit Timah, a preserved forest in the middle of Singapore Island, where curious but friendly. Feeding strictly forbidden (penalty USD 5000!), so they did not expect people to have food. This made them easier to photograph, and the risk of being bitten lower. Bukit Timah also has a nice 6 km trail around it for riding your mountain bike. 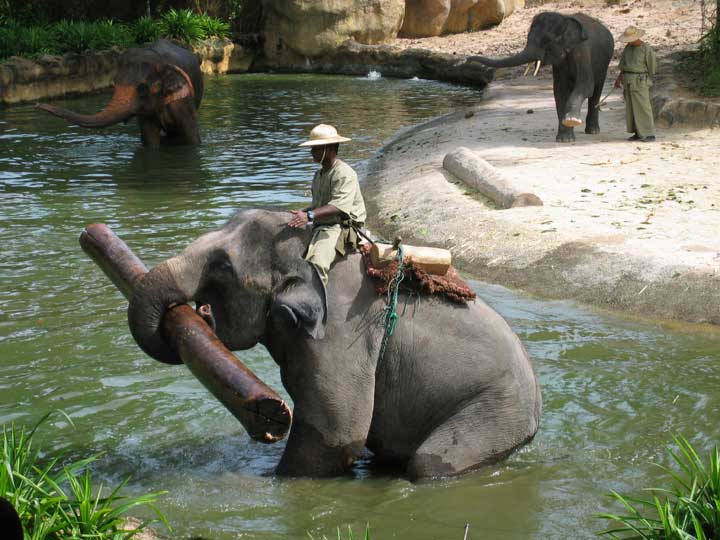 Elephants at work as part of a demonstration in Singapore Zoo. Many demonstrations and show performances were done to show the animals better than just displaying them in cages. This zoo is the best I have ever seen, and most animals had a lot of space. One terrible exception was the polar bear, certainly not happy with 35 deg C in it's very small space. 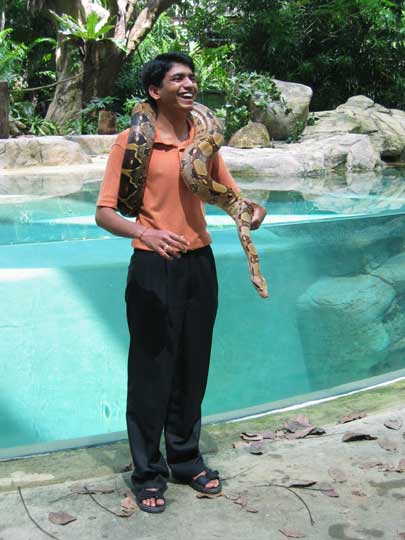 You can also get some hands-on experiances in the zoo, like with this snake. 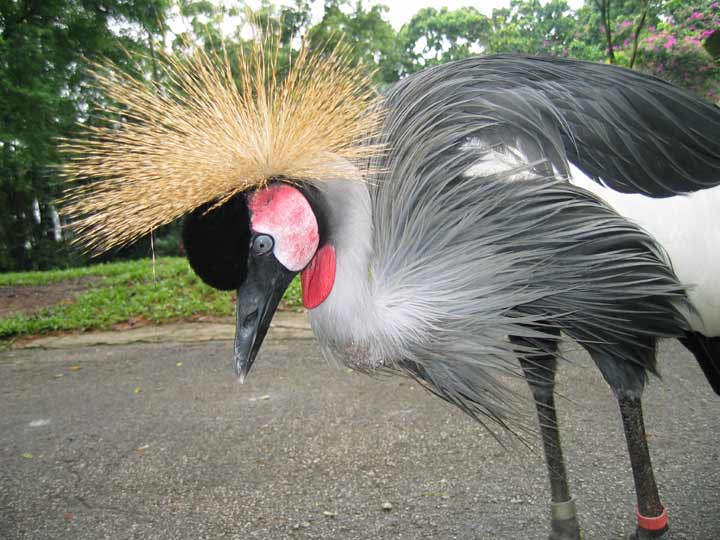 Near the zoo, is the Juriong Bird Park, also wirth a visit. Many birds walk freely around, like this king crane. Obviously used to people, since it allowed this close-up. It was interested in pulling my shoe-laces. 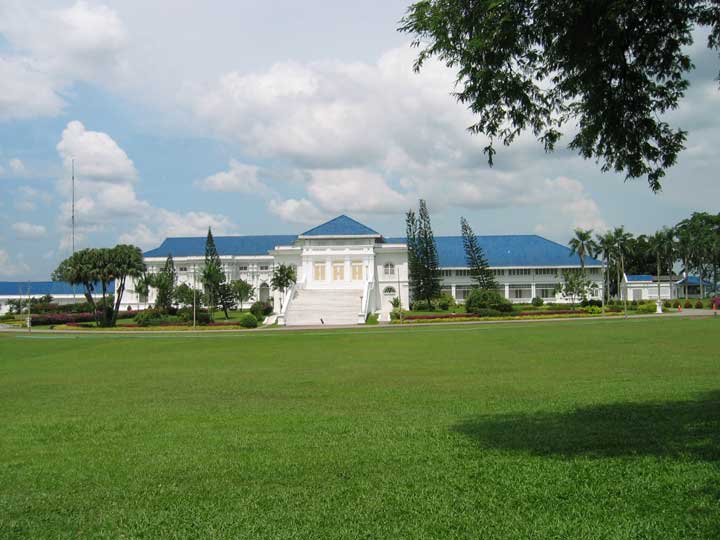 Istana Palace in Johor, just across the causeway and 30 minutes drive from Singapore (+ time to pass immigration). The palace has a fantastic interior, but of some reason the did not allow photography inside (although nobody told me until the end of my visit). This rule was very common in Malaysian museums, while Indonesia usually had no restrictions. I don't know why Malaysia has this policy, but it certainly makes it less tourist friendly. However, most people cross over from Singapore to buy cheap products in Malaysia including pirated software and films etc, or to play golf.