Rio de Janeiro in Brazil is a dream for many, and probably the large city in the world that has the prettiest setting with the beaches in front and mountains in the back. The people are also beautiful, and body is very much in focus here. Brazil is an enormous country, and I never made it to the northern parts including the Amazonia. I did get to travel a lot around the state of Rio de Janeiro and neighboring states in Southern Brazil.I stayed here for a year even if my initial plan was for a shorter period. Because of this, I did not take the effort of learning Portuguese, the language spoken here. Our project used English. Brazilians generally hesitate to speak English, even if they know some. This, and the extremely high crime rate in Rio became noticable limits to my quality of life here. Luckily, there were a number of nice Norwegian and other English speaking colleques at our project here, and we also shared a lot of time outside the office. 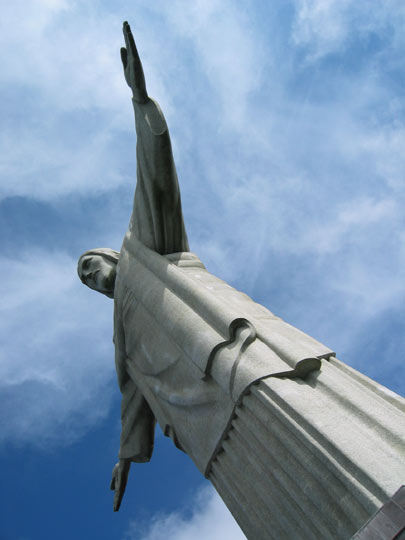 Christ The Redeemer on Corcovado is the famous landmark of Rio, and a prime tourist attraction. The art deco sculpture was built in the 1930s, and there is a railway (a steep one) going all the way up. It is heavily gueaded, and you can safely take your camera out here. 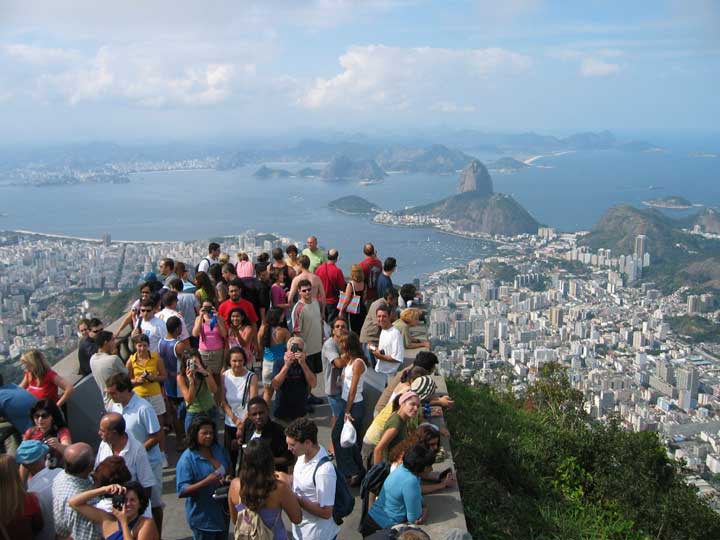 View from Corcovado to sugar-loaf mountain. Always expect crowds up here. ALL tourists going to Rio has this on their itinerary. 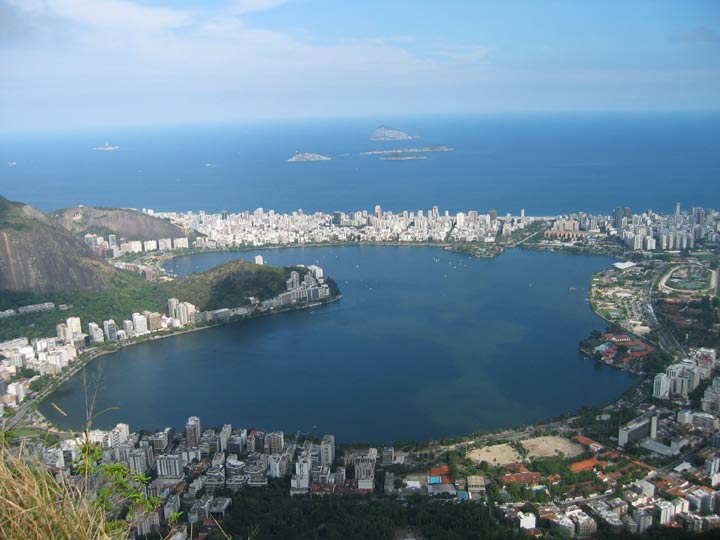 View from Corcovado to Lagoa and Ipanema and Leblon part of Rio. My apartment was in the middle of the strip of land between the Lagoon (Lagoa) and the ocean. 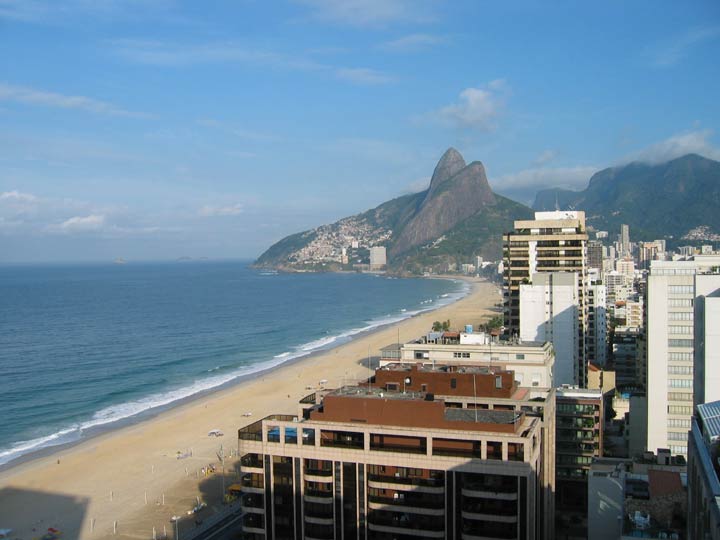 Ipanema and Leblon beaches seen from the roof terrace of Rio Everest hotel in Ipanema. This is a good hotel in a safe neighborhood if you come to Rio on business. It has a reasonable standard and a good breakfast. Next to it is the fancier Caesar Park Hotel. 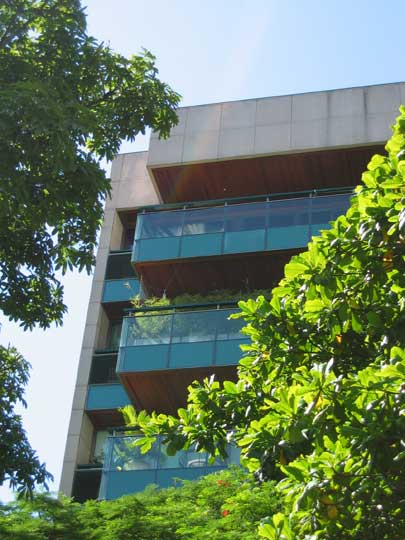 I lived here at the top floor. Nicely furnished apartment, but low quality on technical installations. This is common in Brazil, they buy the cheapest, and maintenance is poor. I don't know how many appliances I had that didn't work properly or at all. The brazilian way is to sit on the terrace with good friends and a drink and forget such practicalities. I partly learned to live with it. 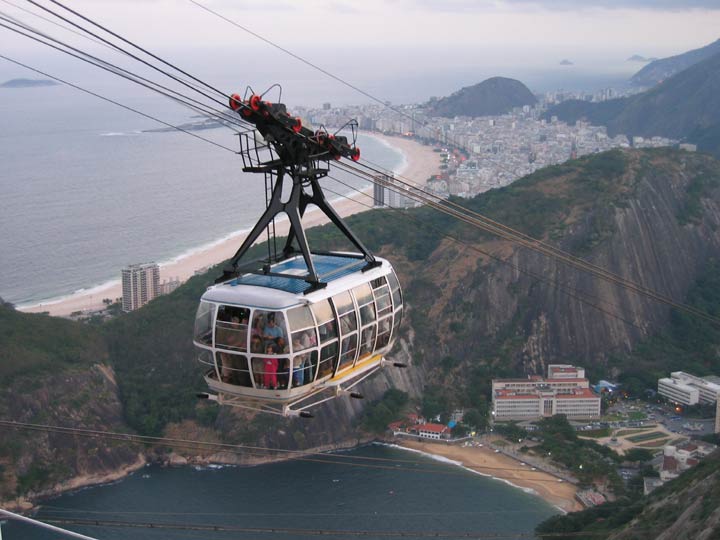 The second "must see" for tourists in Rio is another mountain, the Sugar Loaf. Unless you are a mountain climber, these gondolas will take you there. In the background, you can see the famous Copacabana beach. 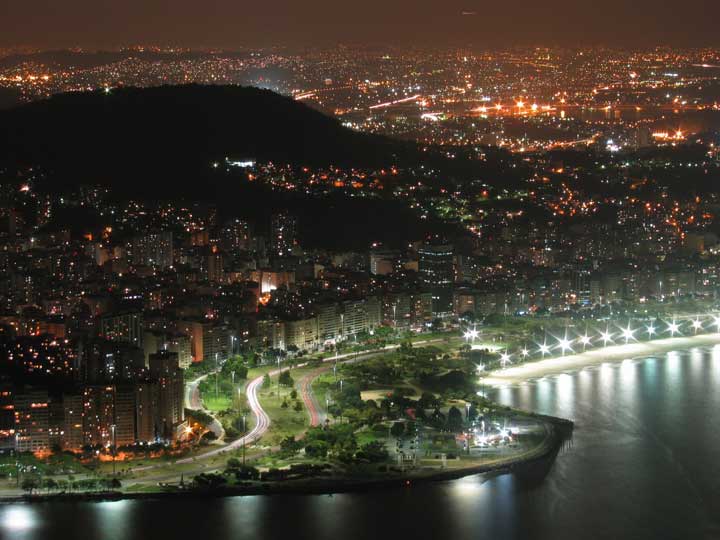 The best time on Sugar Loaf is during sunset. The view at dark is magnificent. The area is heavily guarded and not easily accessible for typical criminals, so you are safe here also after dark. The taxis down below will try to trick you with touristy high fixed prices when you get back down, but insist on going by meter. 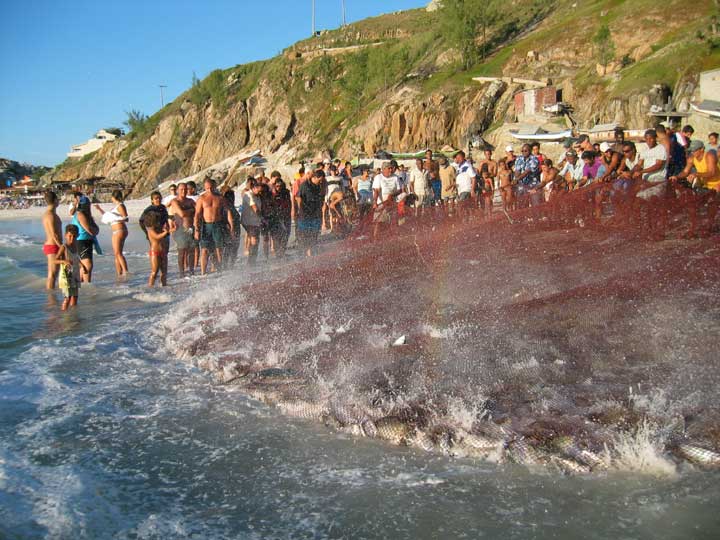 A large catch of tuna on the beautiful beach of the city Arrial do Cabo, 2 hours drive north of Rio. 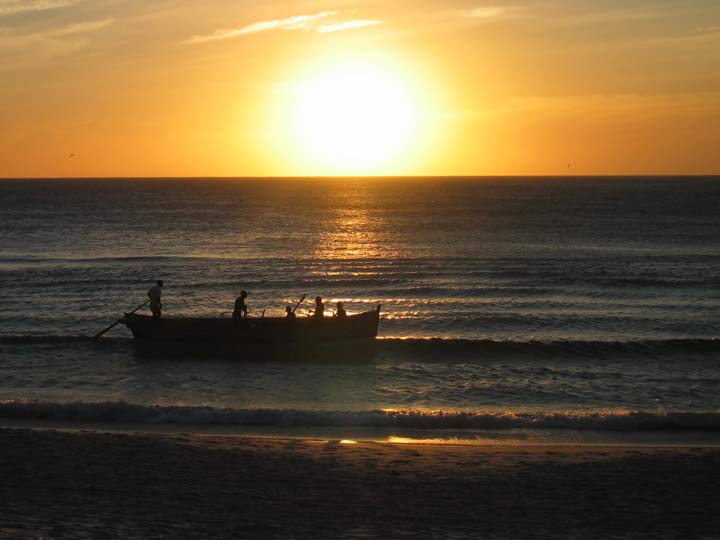 Arrial do Cabo is famous for it's sunset. Driving rented boogies on the 30 km (20 mile) beach in front of the city is also popular. 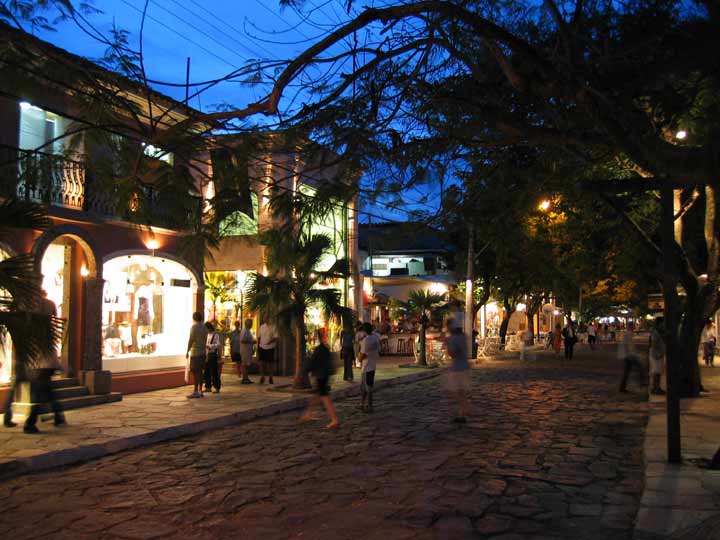 Buzios near Arrial do Cabo is more geared on tourists, but still very nice. It has a bigger variety of shops and restaurants. Luckily, there are no highrises here, most hotels are two or three floors only. Buzios is famous for all it's small nice beaches spread around the peninsula. 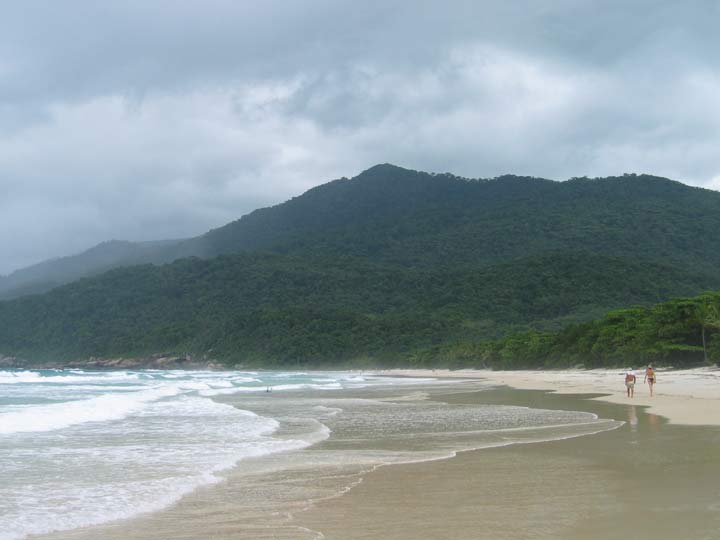 Praia Lopez Mendez, Ihla Grande. Ihla Grande is a nice island about 2 hours drive south of Rio, + 1 1/2 hour by ferry. No cars on the island, safe and clean. This is probably the most relaxing vacation spot by the sea near Rio. The island has an interesting history, and also have the Praia Lopez Mendez, known to be one of the prettiest in Brazil. Weather could have been better, though. 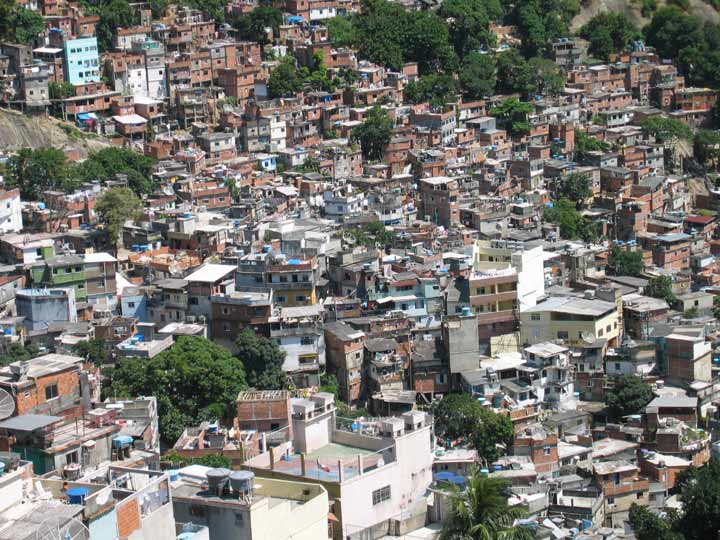 Rochina, one of the many favelas, or shantytowns, surrounding Rio. They are poor, but better organized and with better housing quality than I have seen in slums around big 3rd world cities like Jakarta. These poor neighborhoods is the source of much of Rios crime problems. 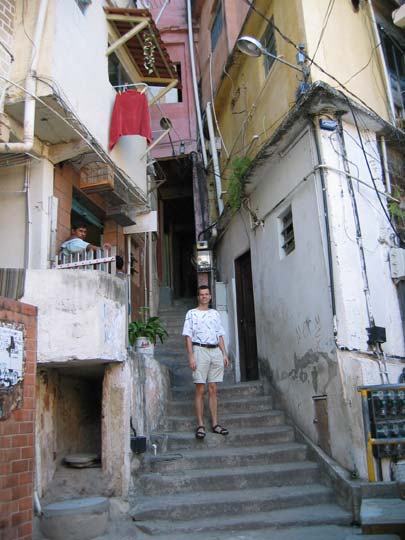 Small alleys criss-cross the favelas. You would be crazy to wander around here without a guide. Shortly after my visit here, gang-wars and drug-lords fights with the police picked up making visits like this too risky. 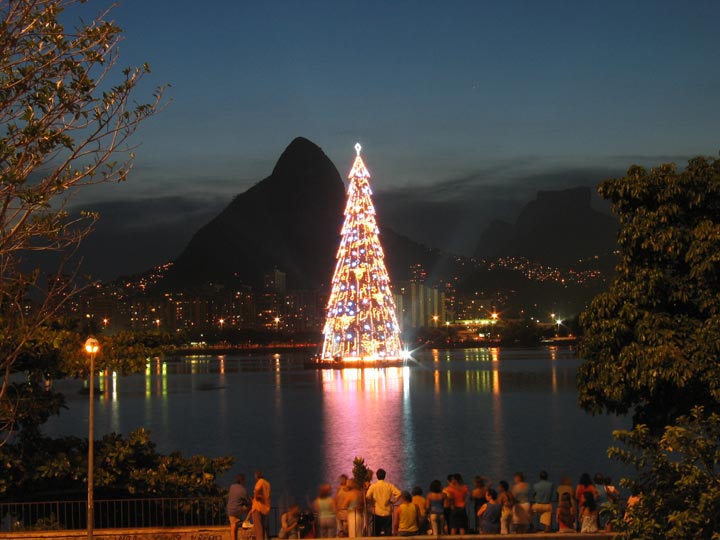 Every year, a big Christmas tree is put on a float in the middle of the Lagoa. Decor is different evenry year. The 2003 steel tree was 80 meters (240 ft) high. 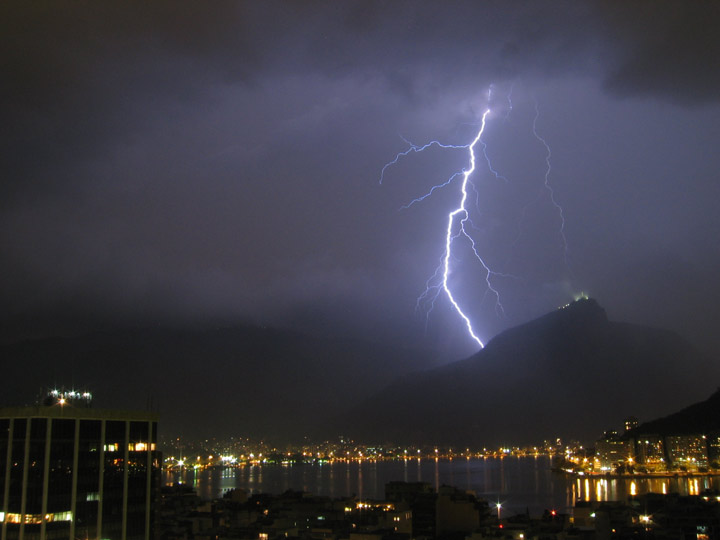 One of my collegues had a penthouse on top of a high building, and we were watching this thunderstorm over Corcovado. I used my camera's intervalometer, and catched this lightning. 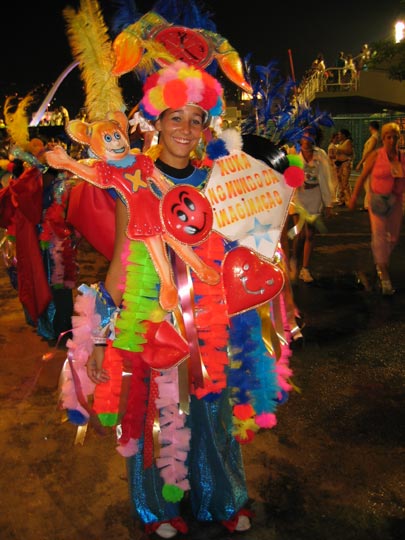 Rio de Janeiro houses the worlds biggest party, the Rio Caraval. This is one of the 25 000 dancers and performers that will perform on this carnaval night alone. There are 3 sugh main nights of performances. The competition between different samba-schools is serious business, and only the best are allowed on the main nights. Lower divisions performs other nights or other places. 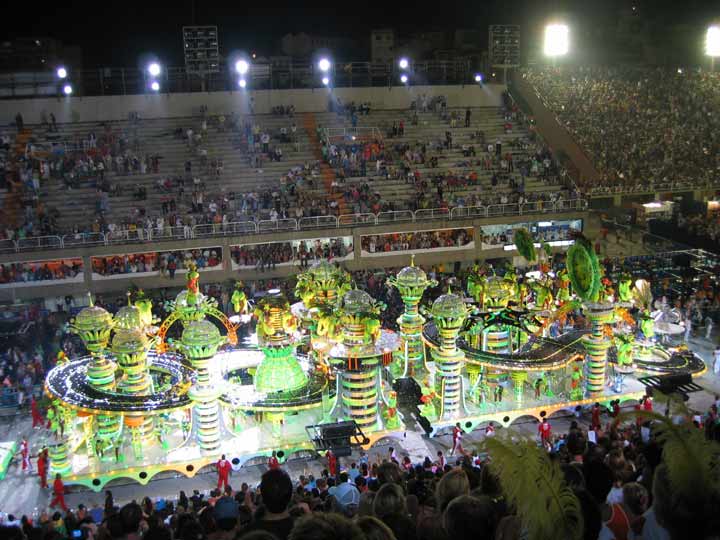 In addition to music and dancers, the parade also has plenty of fantastic floats, like this one. It also had an operational go-cart racing track on it, complete with racing go-carts. 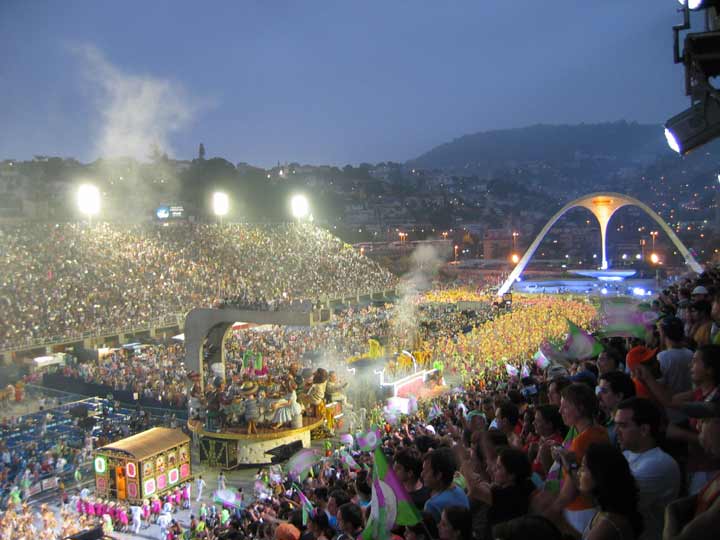 The Carnaval night lasts long into the next morning. It takes a while for 25 000 dances to pass by. If I get a chance to see another carnaval, I would like to sit closer, but oh, those tickets are expensive. 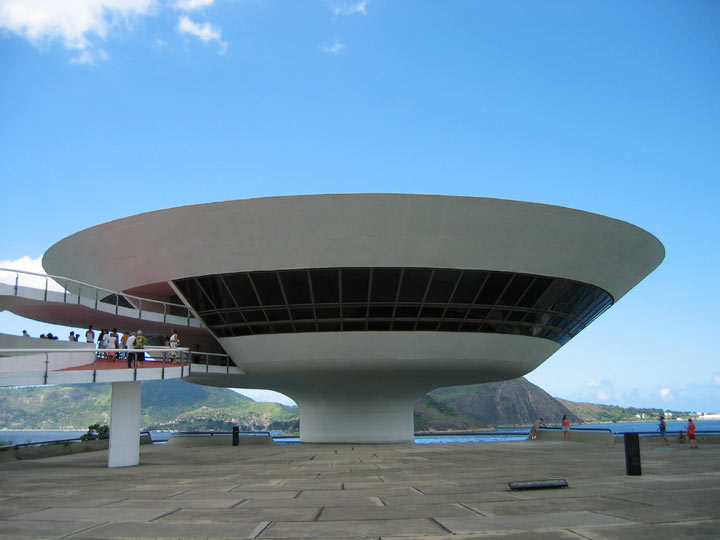 The Niemeyer designed museum of modern art is the main landmark of the city of Niteroi. The yard I worked on was in Niterioi, about 30 minutes drive from Rio across a 13 km long bridge. 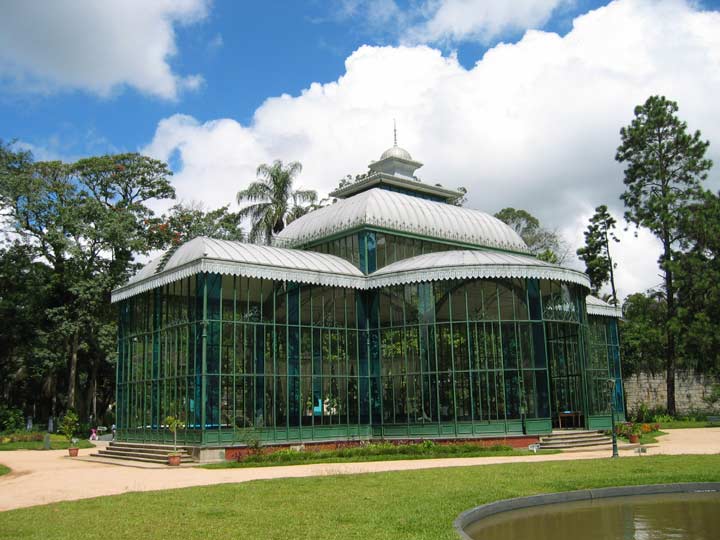 There are many nice little towns within driving distence from Rio. Petropolis probably has the largest collection of old stylish homes, and also this crystal palace pavillion. Petrobolis was a retreat for the rich in Rio, when Rio got too warm. 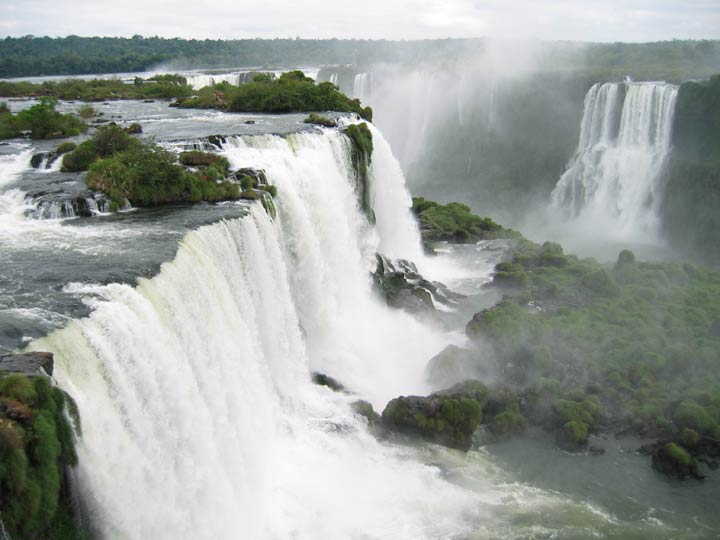 Foz do Iguazu, on the Brazil - Argentina - Paraguay border is about 3 times bigger than the Niagara falls. It is said that the wife of President Roosevelt expressed "poor Niagara" when she saw this. It is one of the main sights of South America. Stay at least two days, preferrably 3, and see it from both the Brazilian and Argentinian side. 2 hours flying from Rio. 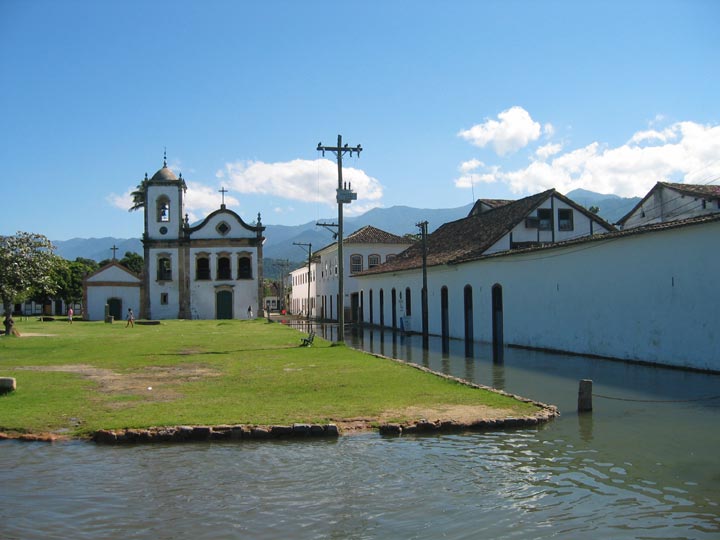 High tide in Paraty, the best preserved colonial town in Brazil. The tide is an effective way to clean the city streets very day. It is about 4 hours drive south of Rio, and there are also excellent and very comfortable bus connections. 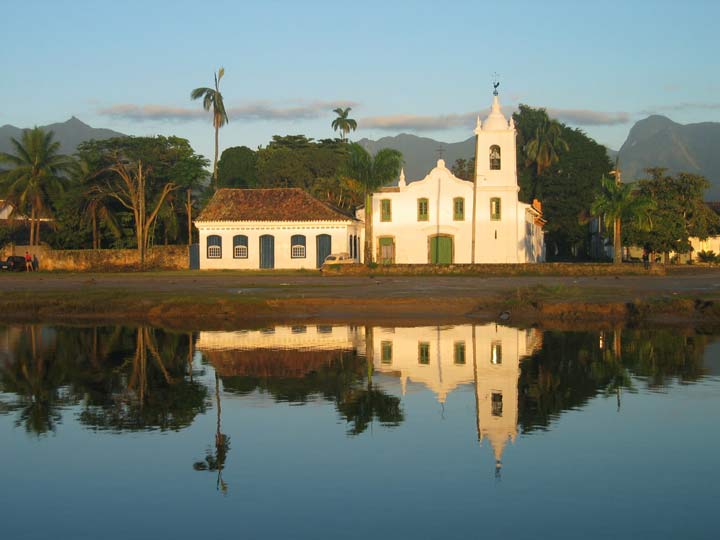 The evening sun is licking the old colonial buildings in Paraty. Paraty played an important part in the early history of colonal Brazil.