Russia is the worlds largest country by area, and also one of the most exciting. It is still going through quick and sometimes painful changes after getting rid of communism in the early 90s. Signs from the communist days can still be found in how things appear and hove they are done, but except for the many monumental structures from communist days, other remanences are disappearing quickly. Hurry up if you want to experience this in other places than museums. I am glad I got to experience Russia in such an interesting part of it's rich history, but also to be in the great city of St. Petersburg with it's surprisingly European flavour, marvellous buildings and atmosphere. 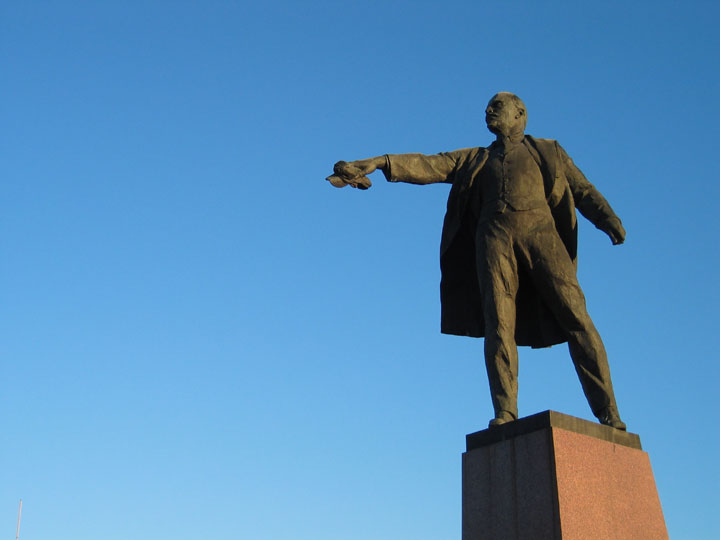 Lenin is by many Russians today considered to be the mind behind a good communism that would have brought prosperity to the former Soviet Union had he been around longer. Stalin is by many Russians considered to be the mad dictator that damaged the possibilities for the Soviet Union during his 3 decades of rule. Because of this, you find many Lenin monuments around Russia, but not many of Stalin. This Lenin statue on the Moscowskaya square in St. Petersburg is one of the largest I saw. 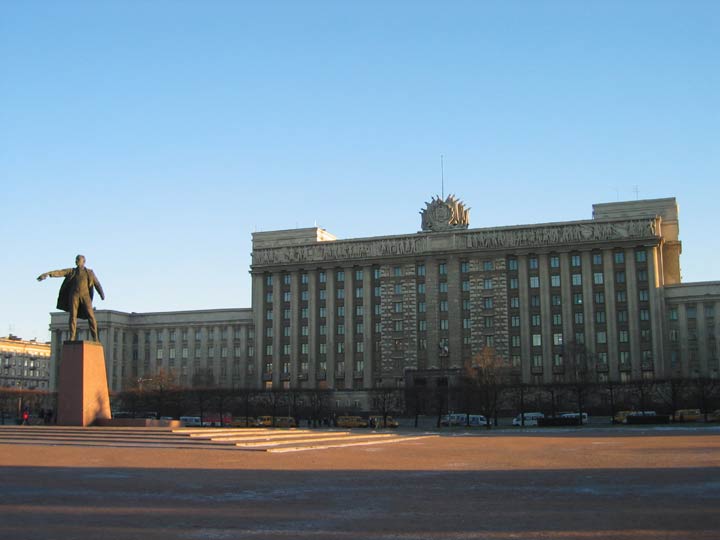 Moscowskaya square in St. Petersburg with a typical monumental communist office building. Note the same Lenin monument to the left. 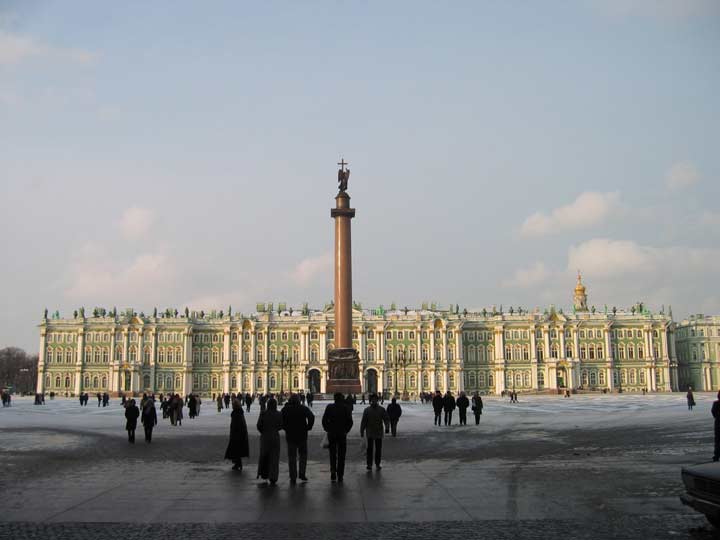 The Winter Palace and Hermitage in St. Petersburg is thougth to be the most impressive museum in Russia regardless of category. Based on what I have seen, I agree. It is enormous and fantastic, but also raises an understanding of the background for the communist revolution, that started in this town. For many visitors, it is the main reason to visit St. Petersburg, and it is worth the trip. Do not forget that St. Petersburg has a lot of other offerings. 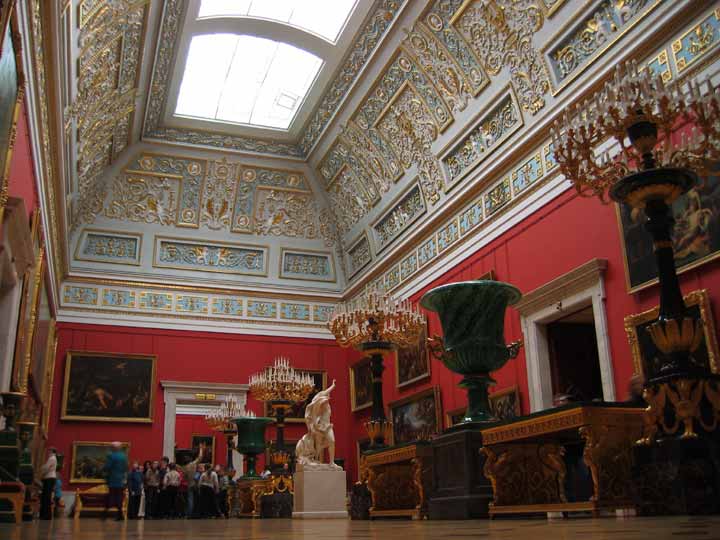 100s of fantastic rooms of great architecture filled with famous paintings, beautiful sculptures and other artwork. This museum holds one of the largest collections of some of the most famous painters like Rembrandt, Picasso and others. 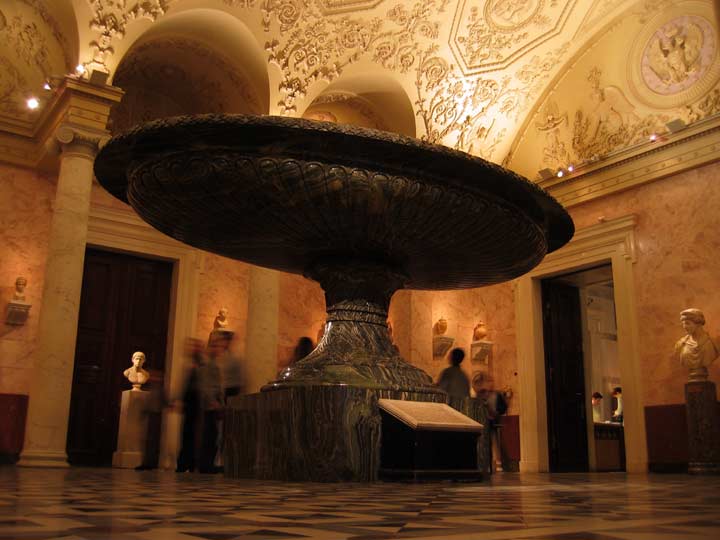 This vase weighs more than a full-size bus and took many years to make. One of many examples of unique pieces found in the Winter Palace and Hermitace collections, that also is a testimony of the extreme wealth of the tsar family. 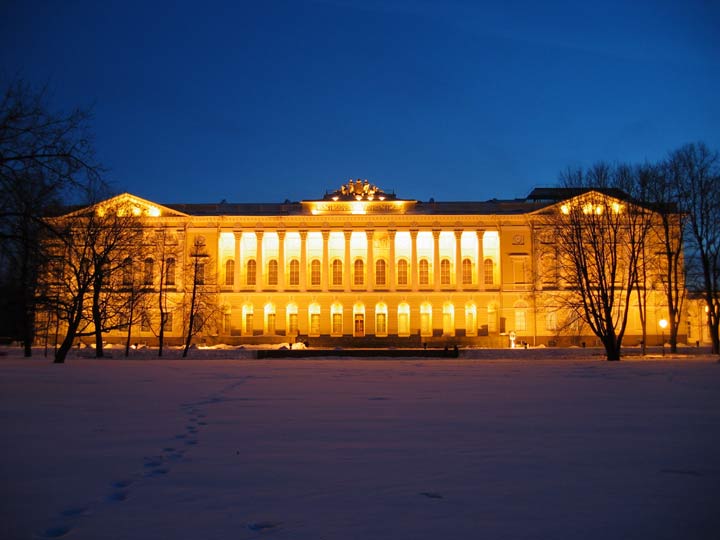 Russia Museum is the number 2 museum in St. Petersburg after the Winter Palace and Hermitage. It is dedicated to paintings by Russian painters. 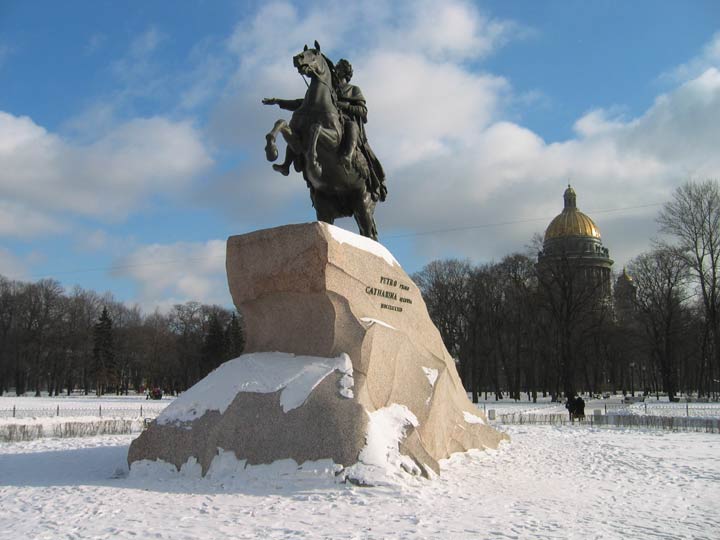 You usually see newly weds posing in front of this statue of Peter the Great. Behind, you see the cupola of the Isaac Cathedral, probably number two on many visitors itinarary after the Winter Palace. It was heavily influenced by the St. Peters Cathedral in the Vatican. Great interior, and city view from the dome (separate ticket) 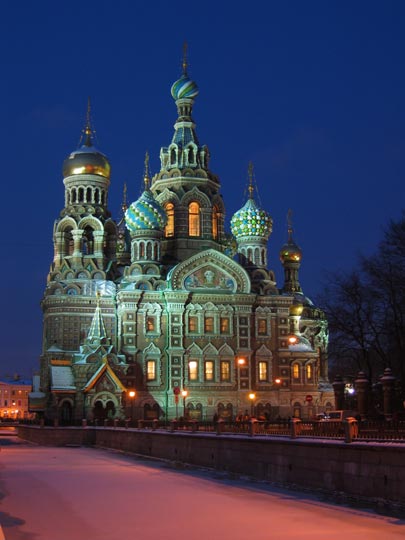 Church of the spilled blood is one of the most magnificent churches of typical Russian architecture. I think it's exterior is better, and the interior is much better than the more famous Vasilij Cathedral on the Red Square in Moscow. A good reason to visit St. Petersburg rather than Moscow if you have to choose. 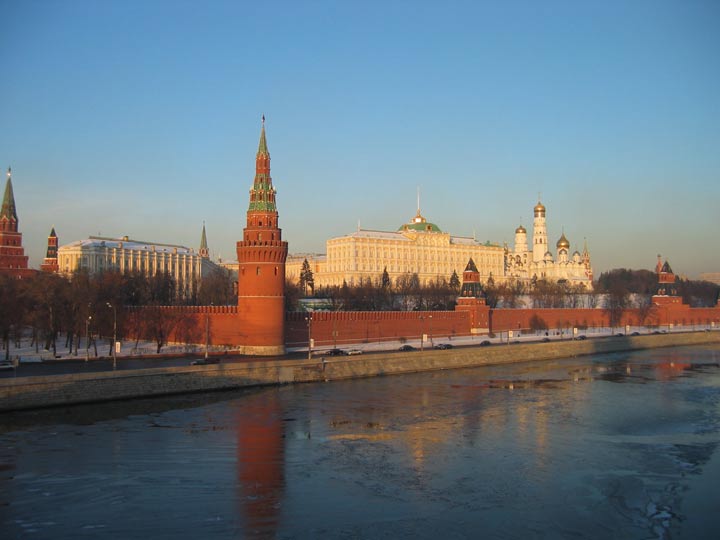 I made three visits to Moscow during my stay in Russia, and this is the Cremlin where the top leaders have their offices. Many Russian cities have a Cremlin with walls and watch-towers, and a cathedral and other building inside. They are usually open to the general public, but recently, the Cremlin in Moscow has been closed. As usual, no explanation was given, but judging from barricades and security at the entrance, I would assume it's due to the threat of terrorism. It was said it was possible to arrange visits in advance, but I never managed to figure it out. Pity, because this means Moscow has lost it's #1 tourist attraction. This is a GOOD reason to go to St. Petersburg instead of Moscow.
Last minute note: Russian Museums are (with a couple of exceptions) notoriously known for lousy service to foreigners, even if they usually have to pay higher admissions than Russians. This includes surprises on when they are open or not, and lack of information, particularly in English. On my last visit to Moscow, I found the Cremlin was open again, but that there is now an admission, and strict security inspection on entry - airport style. 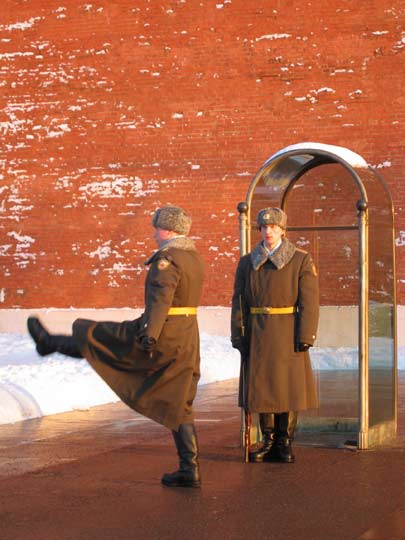 Changing of the guards on a memorial just outside the walls of the Cremlin in Moscow. 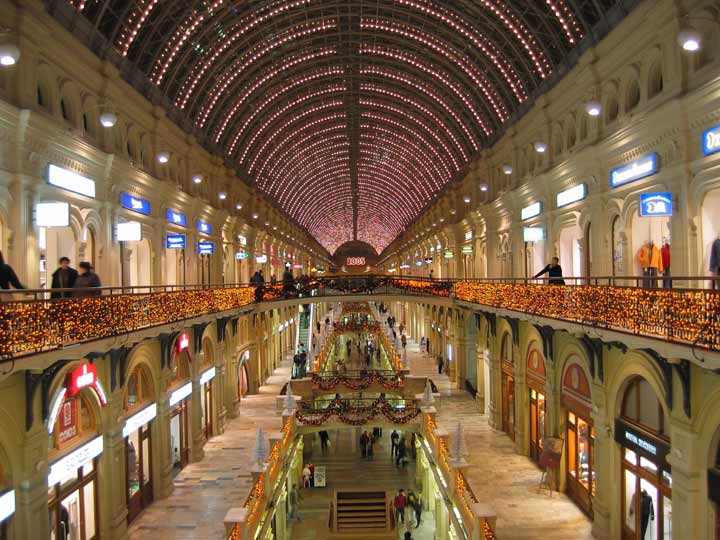 For shopping malls, few can match the interior of the GUM shopping centre on the Red Square in Moscow. Here it is decorated to celebrate the coming year 2005. New year celebration is a more major event in Russia than in the western world. 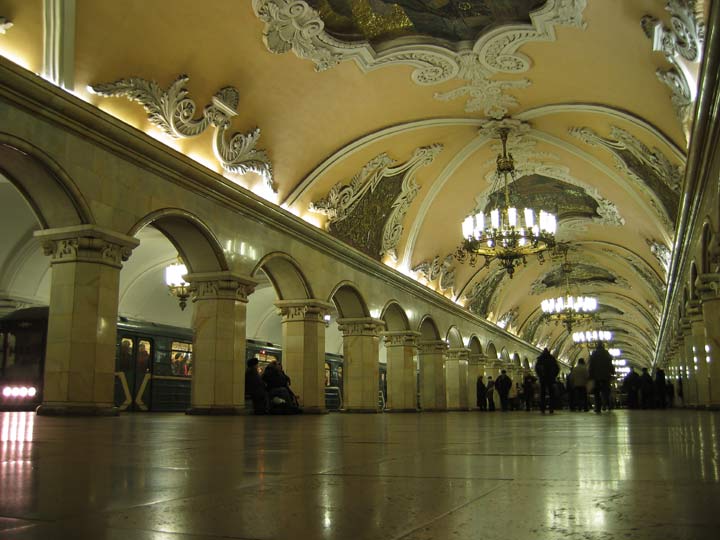 The Komsomolskaya metro station on the Moscow Metro is the most magnificent metro station I have seen. Lots of marble and crystal. This is certainly some of the nicer inheritences from the communist era. 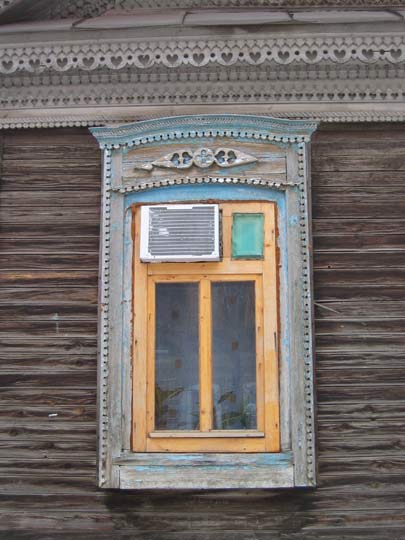 Russian carpenters are known for their skills, and you can find many richly decorated wooden buildings around Russia, like this window found on a building in the city of Astrakhan in southern Russia. In Arkangelsk there is a museum with a collection of wooden buildings from Russia. 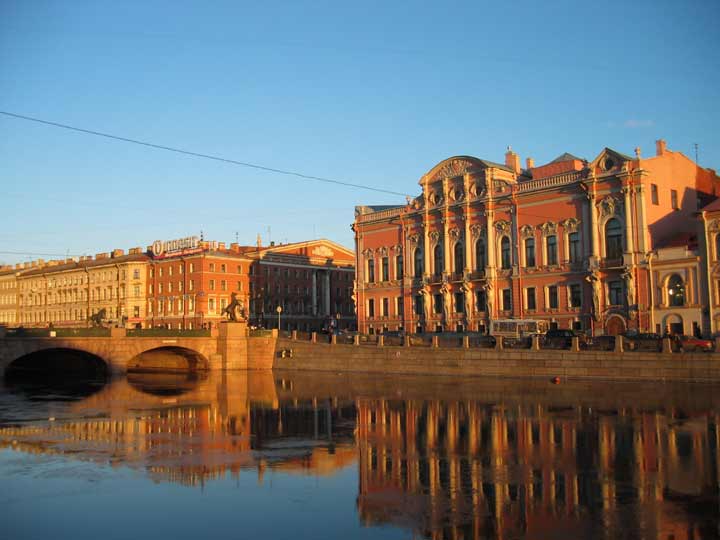 Back in St. Petersburg, this is the Anichov Most (most means bridge) taking the famous Nevsky Prospect across the Fontanka River. Nevsky prospect is known as the most famous street in Russia, and most tourist attractions are within walking distance from this. 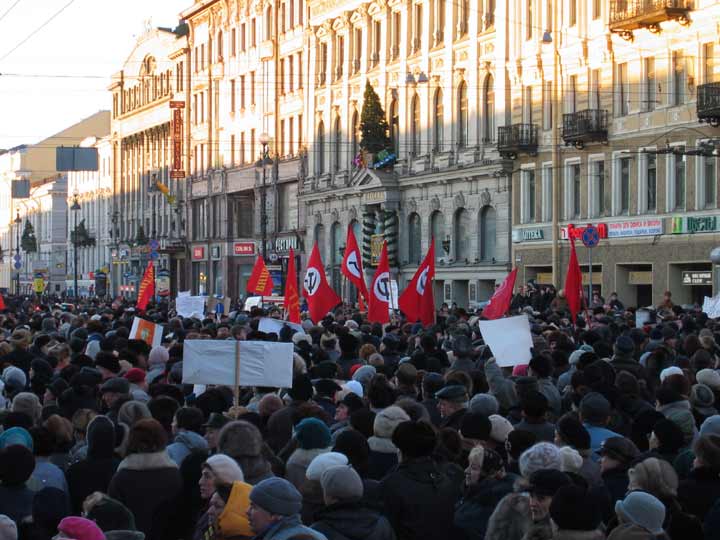 Pensioners taking to the streets to demonstrate against removal of certain free services they have had since communist days, like free rides on public transport. This was compensated by a small rise in pensions, but not enough according to theese demonstrators. The communist symbols in their flags indicate their preferred political system. 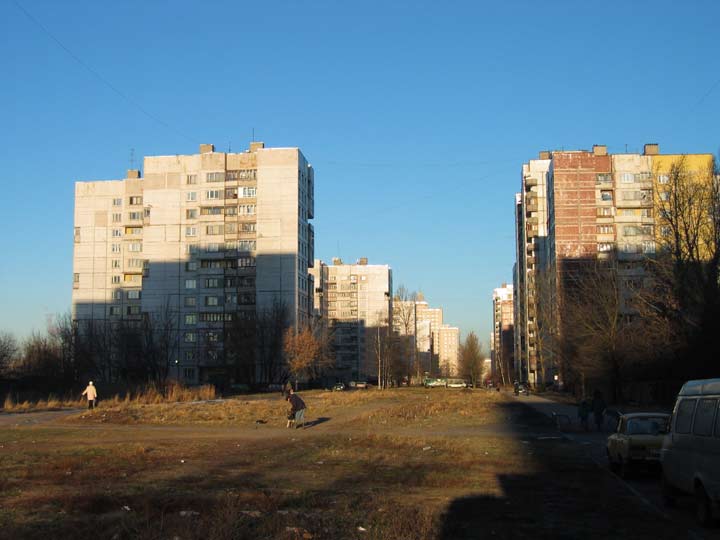 Large surburban dwellings from the later years of communism is the home for many ordinary Russians living in larger cities. Maintenance seems to be absent, and there is obviously no interest in keeping the surroundings nice. In Russia, there is still a general idea that this is the job for public services, and not to be taken care of by residents. This is also a reason why many Russians hesitate to own their own property, they become responsible for maintaining it. 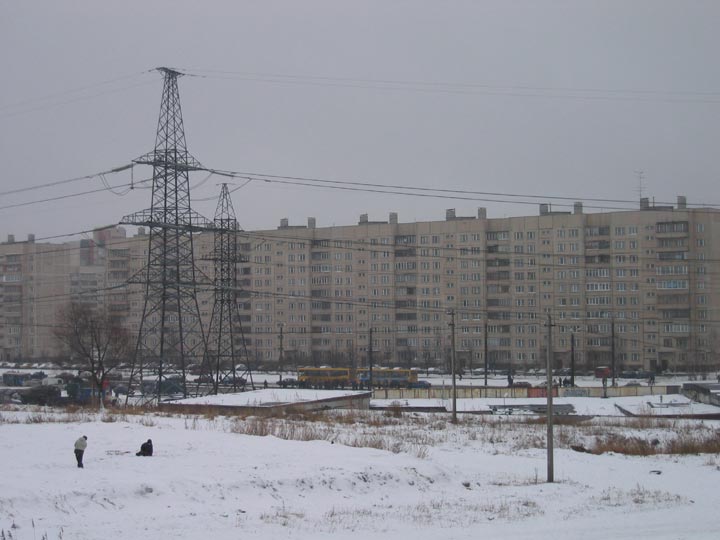 Winter covers up the debris on the ground, but the grey appearance of these massive apartment blocks doesn't disappear. Two kids are playing nearby. For kids, this is better than it first seems. It is perfectly safe to be outside (as long as they stay away from traffic), and most open areas are available to everyone. Many of these developments are surrounded by large open areas and parks available to the general public and children for playing. 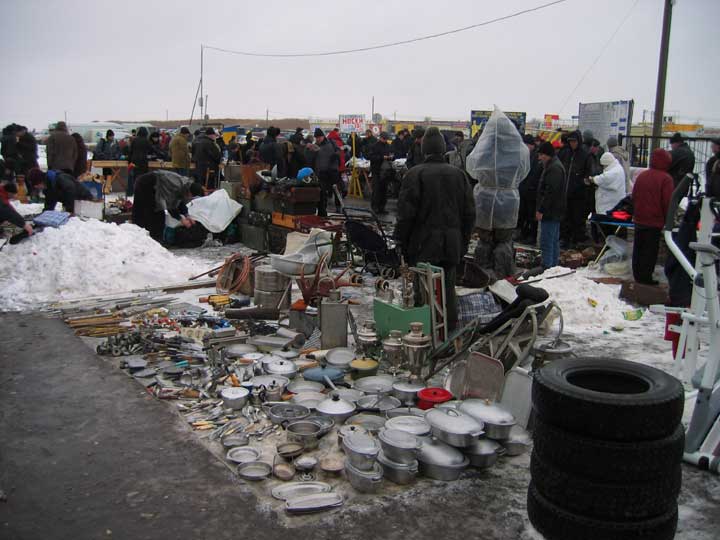 This large market with everything from commercial dealers to private people selling stuff is quite common around Russia. One of the Samovars (machine for preparing tea or hot drinks) in the centre of the photo became a souvernir of mine for about $15. A deal both I and the seller seemed very happy about. 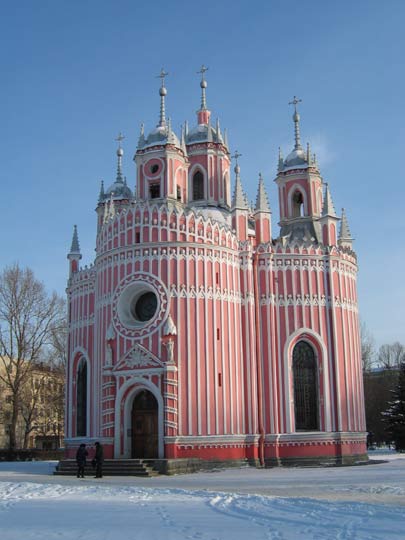 You will never manage to see all churches in St. Petersburg, but I found the exterior of this small church very special and inviting for photography, that is after the service was finished, and the rusty old Lada cars surrounding it was gone. 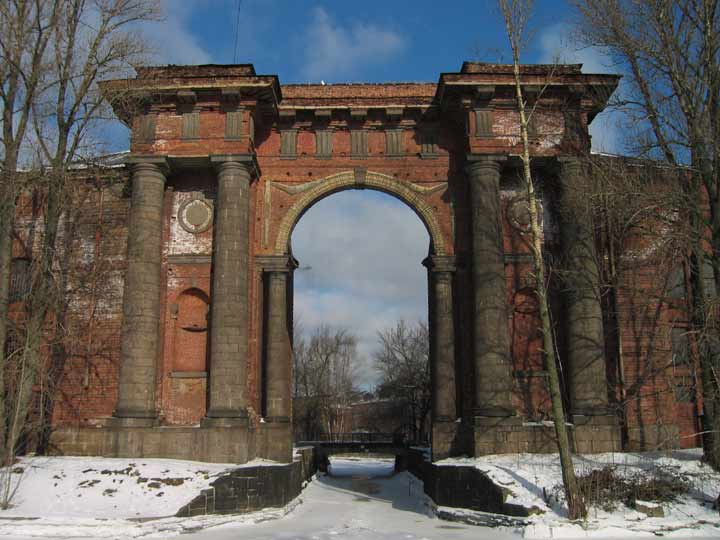 This arc I found in a less touristy part of St. Petersburg. It was in great disrepair, ans many other magnificent buildings in this area. It was sitting on a small island surrounded by canals and rivers, and obviously served naval purposes in the past. I later found out is was about 250 years old. 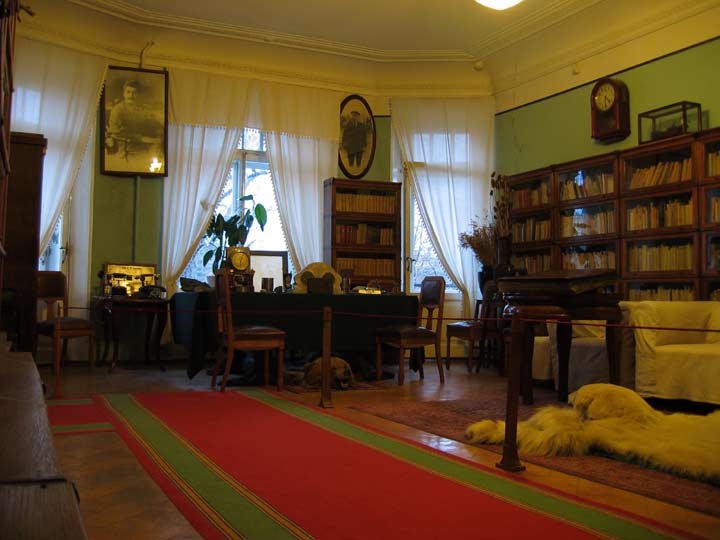 Kirov was a popular comminist leater in the region around St. Petersburg in the 1930s. He was assassined, and this was a main reason for Stalin to start his terrible rinsing of suspected enemies in early communist days. This costed millinos their lives. Today, many people belive Stalin was behind the assasination of Kirov. He might have seen Kirow as a threat, as Kirov was both smart and popular. This museum is well worth a visit, and consist of Kirov's apartment, and displays about growing up in communist times in the neighboring apartment. I received one of the most friendly welcomes I have ever experienced in a museum here. A friendly, very welcoming and knowledged staff, including one lady with good knowledge of English. Same, low price for foreigners as for Russians. An honest interest in making the museum visit a memorable experience for the visitor. Recommended, but a bit hard to find. Is on 5th floor in an old (once fancy) tenament building. 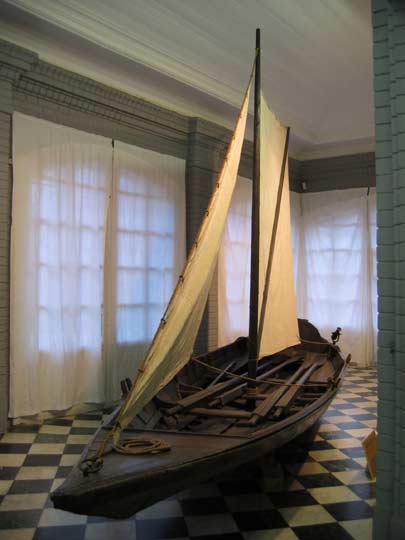 Peter the great was the founder of St. Petersburg, a great leader and and a big person, more than 2 meters tall. He was also practical, and built this boat himself diring his first year in St. petersburg. Note the small cannon on the port side near the aft. This can be found in the small "Peters cabin" museum that holds the first home of Peter the Great in St. Petersburg. 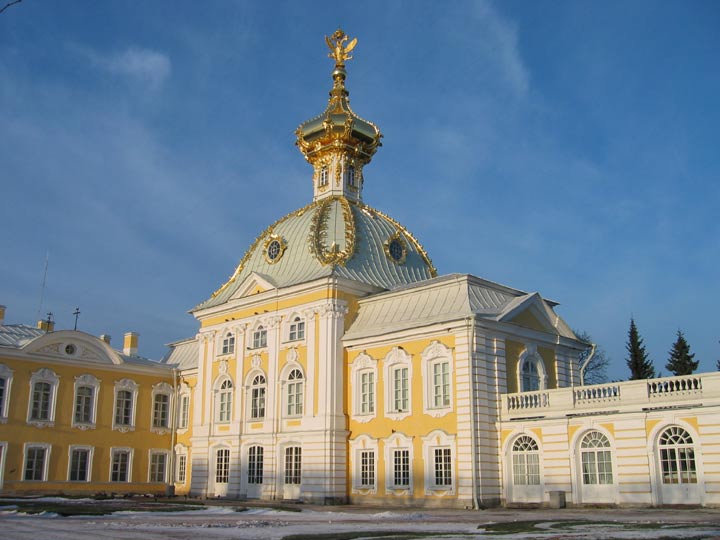 This is one of the summer palaces near St. Petersburg. A day trip to one or more of these is a good idea if you stay more than 3 days in St. Petersburg. This palace in Peterodvorets has a beautiful large park with sculptures. In winter, all sculptures are crated, but you will have the place more to yourself. 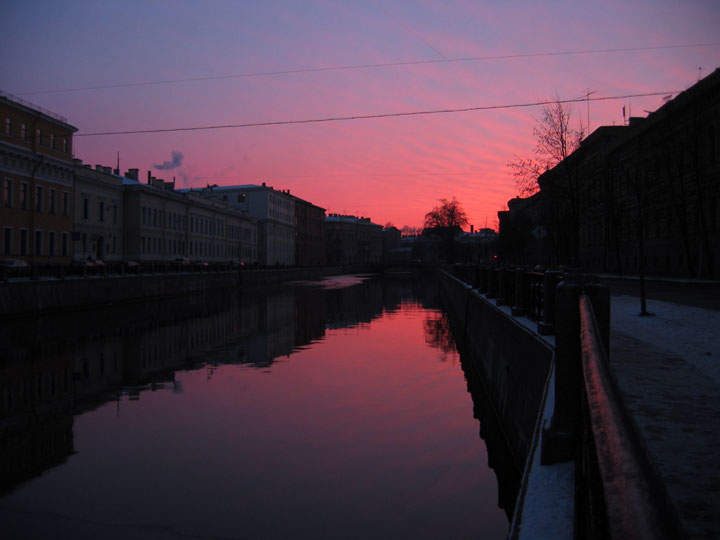 This late winter evening picture of the Canal Griboedova where I lived wraps up these images of St. Petersburg.