Belanak engineering took place in Singapore while the Siemens switchgear was built in Jakarta, Indonesia. Siemens was also responsible for delivering five e-houses and install the switchgear inside. E-houses are steel buildings equipped with electrical switchgear and automation systems. The whole building with equipment is then lifted onto the deck of an oil production facility. The e-houses were built at an Indonesian yard in the village Bojonegara, about 3 hours drive from Jakarta. Besides being technically interesting for me as an engineering manager, this was also a chance to learn more about people of different cultures and religions. 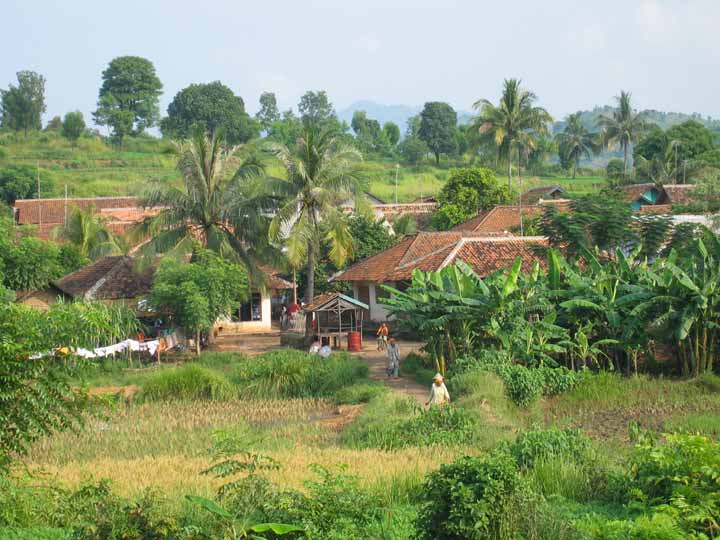 Bojonegara had some nicer areas like this one, but also some more run-down areas. A somewhat sleepy place soon due to be changed dramatically. A new main port for West Java was planned in the area. Rice is the main crop, and oxen are used in the fields. The basic needs are covered by what is produced at the farm, and income from the yard is a nice addition that allows purchase of a TV and a motorcycle. 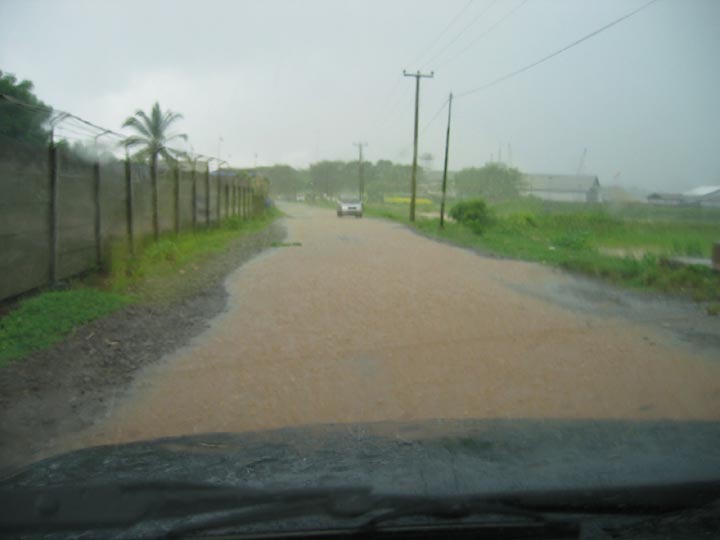 There used to be rainforest arond here, but the forest is gone. The rain, however, can still turn roads into rivers. Poor road quality was one of the main problems for the yard here. With the new port coming, this is likely to change. 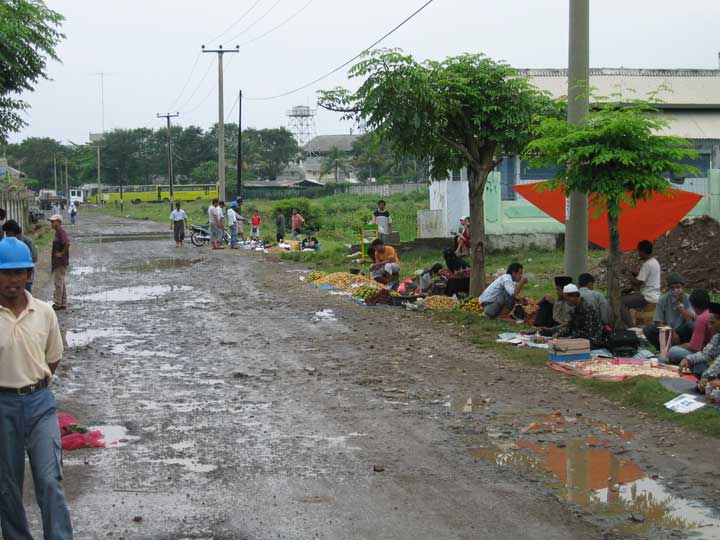 Local markets were put up along the road, typically outside the yard on payday. It was quite common that workers used their hard-hats outside the yard after working hours. Maybe to signal to others that they were employees. 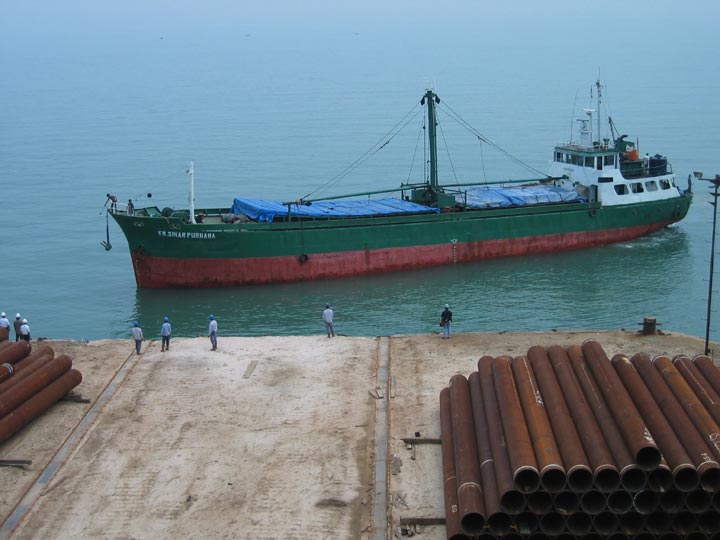 Smaller freighters of all sorts and in all conditions travel in Indonesian waters, like this on, bringing steel to the yard. 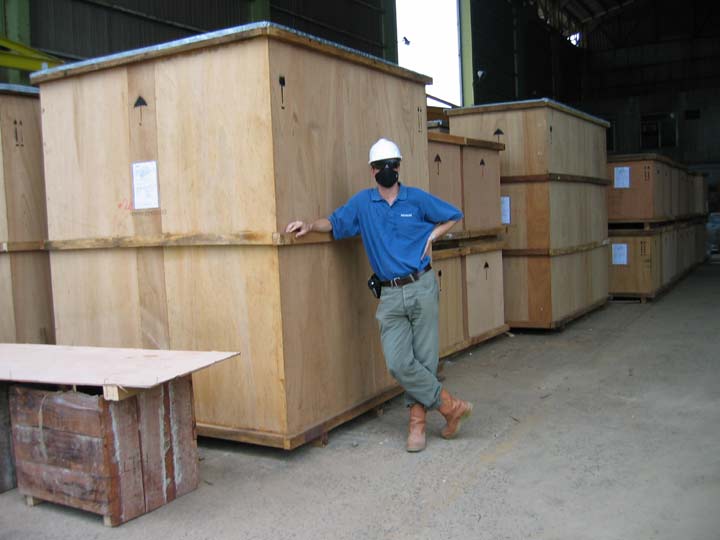 Here I am posing in front of the crates containing the MV switchgear from Siemens. The crates are well built with proper tin roofs for weather protection. The yard had covered areas to store them, so the switchgear was well protected. After installation, parts from these crates where observed put to use as walls in shacks in the village outside the yard. My dark glasses are for the sun, and the mask used in dusty environment inside during welding and sand-blasting.

Welding and cutting of steel may produce some interesting photos. 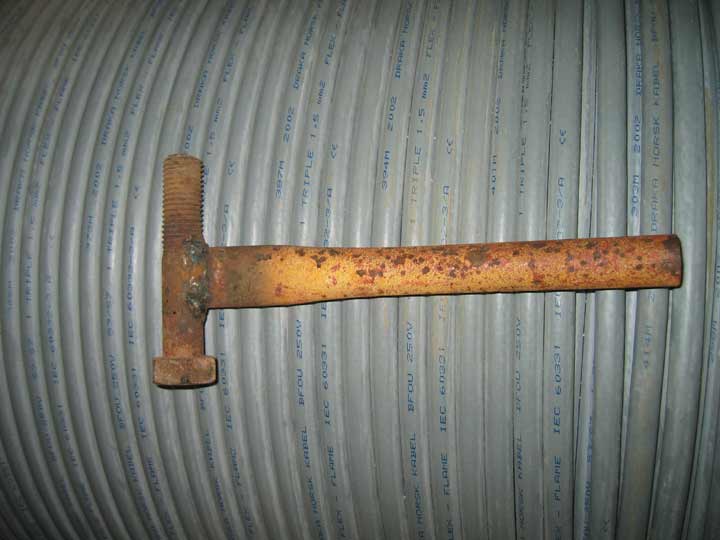 With low labour costs and a long distance to the nearest tool supplier, it is often a better option to make your own, like this hammer made of a piece of pipe and a bolt. Interesting also to see that cable from a Norwegian cable manufacturer, Draka, has found it's way down here. 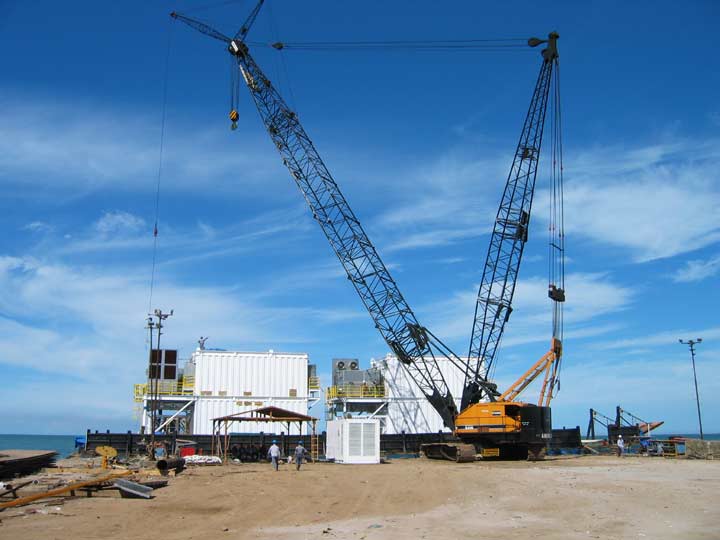 These are the two first of a total of five e-houses supplied as part of the Siemens Belanak contract. These were delivered only about 8 months after contract award. 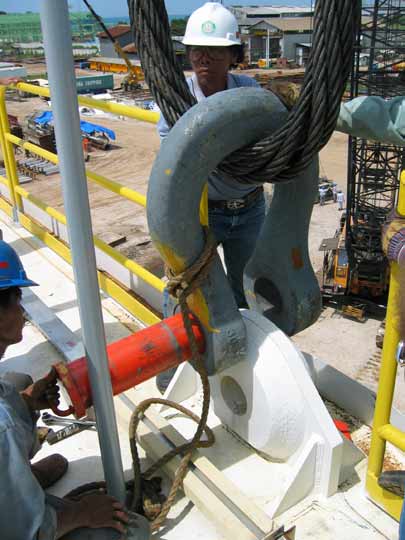 Big shackles are needed to lift an e-house. Best to try it properly before the big day of lifting onto the FPSO. 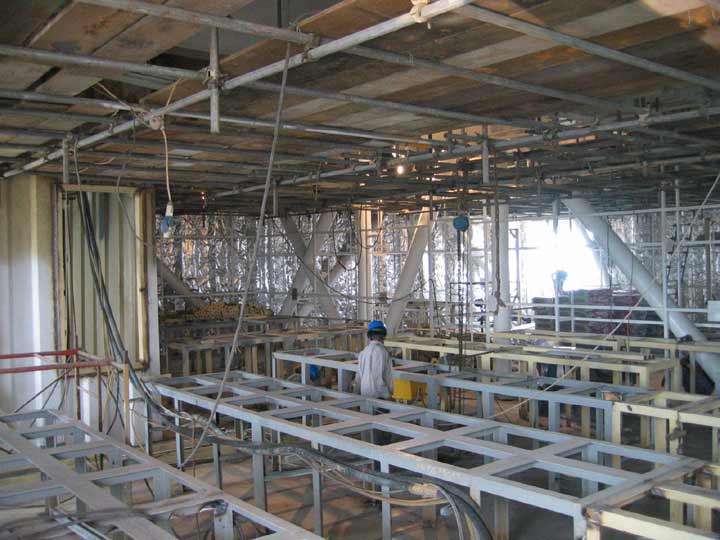 These frames are the supports on which equipment will be installed. Raised floor will be built around it, allowing cables etc to be run under the raised floor and up into the equipment from below. This gives a tidy and nice appearance of the finished room. 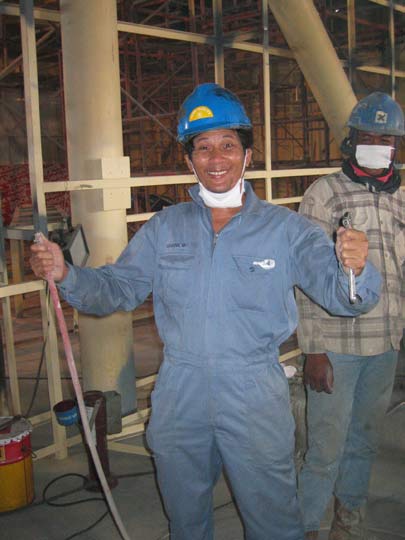 Most Indonesians were happy people, like this cheerful guy. They were usually happy, and sometimes very keen to be in your picture. 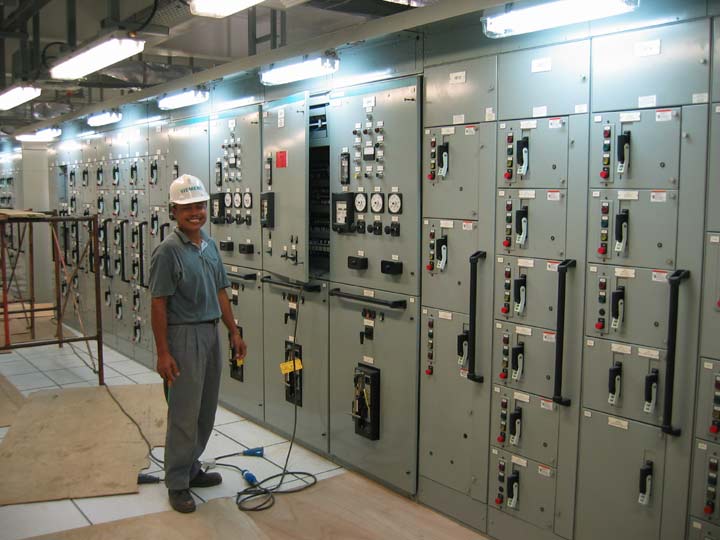 This is the 480 V Low Voltage switchgear and MCC used for smaller motors and various other electrical consumers. It is built to American ANSI-Nema standards. Our cheerful engineer from Siemens was there looking after the switchgear at all times, and also making those final fixes. 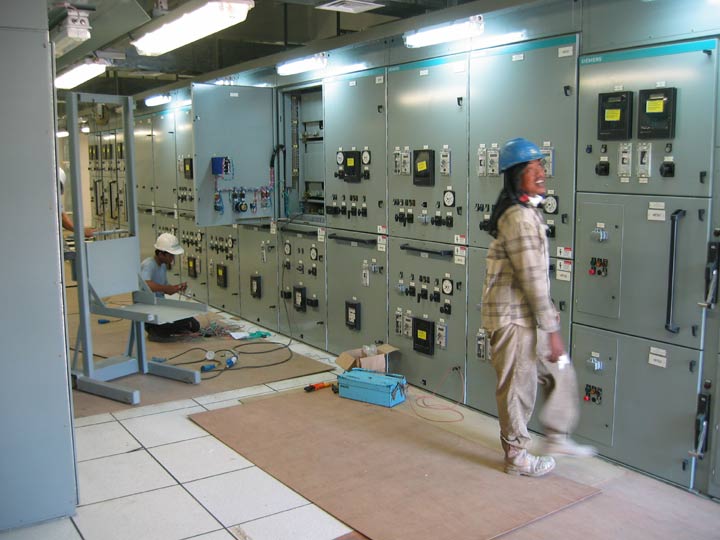 4.16 kV and 13.8 kV Medium Voltage switchgear and MCC are used for distribution of power from main generators to large motors and consumers, and also to transformers transforming to lower voltages used by smaller consumers. 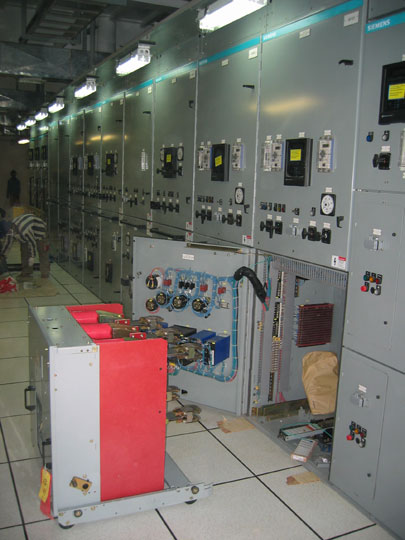 Circuit breakes in MV switchgear are large, and can be rolled out on the floor for inspection and service. For circuit breakers installed higher in the switchgear, a lifting device must be used, as they are way too heavy to be carried by two men. 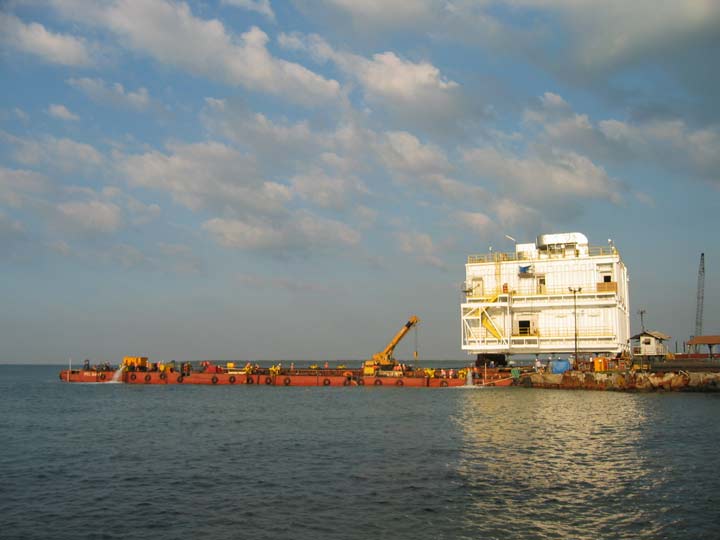 The largest of the five e-houses withing almost 1000 tons being slided onto the barge for shipping to our customers yard. 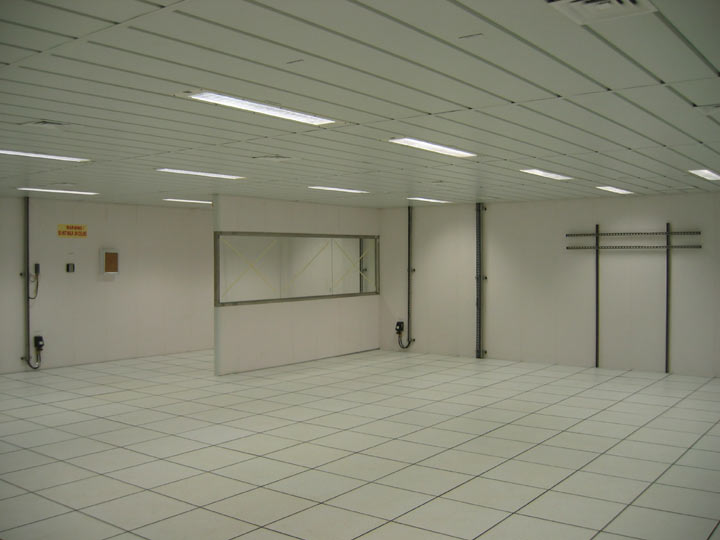 The largest e-house also include the controlroom for the whole FPSO Belanak. Automation systems were not part of Siemens supply this time, and will be installed by the customer after he received the e-house. 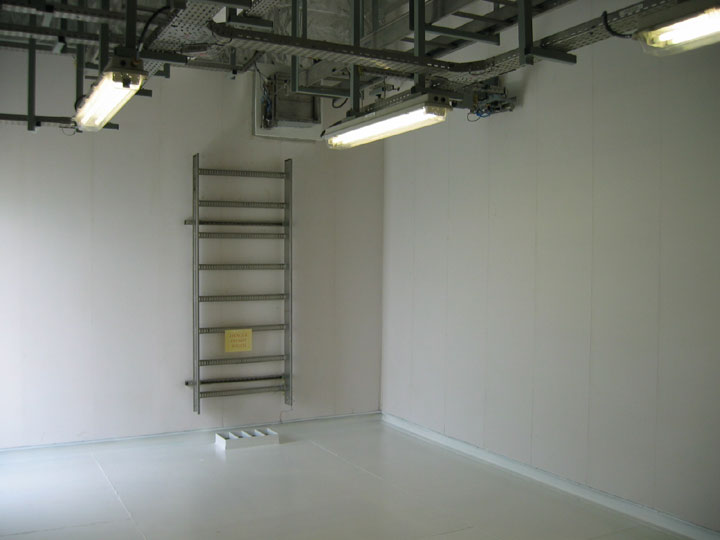 The battery room prior to installing the batteries. 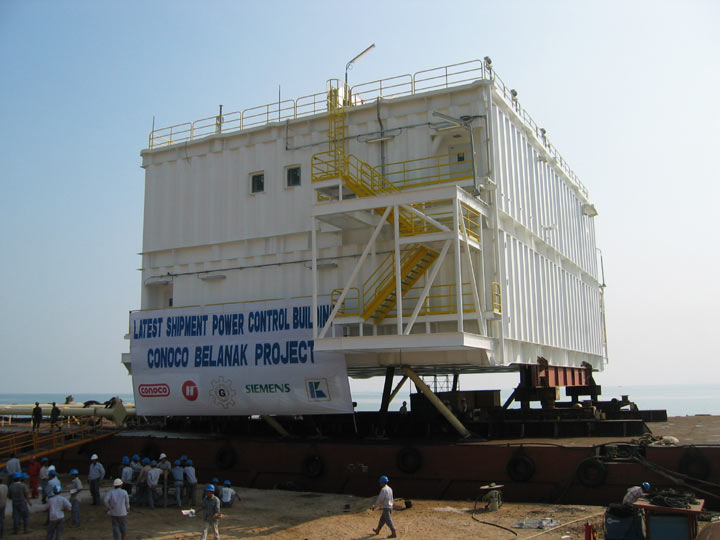 Here the big e-house is ready for sail-away, and one of my last days at the yard. Due to the many pirates operating in the waters around Indonesia, a team of heavily armed guards where hired to stay on the barge during the towing. They put un an army style camp under the building with tent and all.